Beyond Afghanistan » 20 Dead, Over 1,000 Injured after 6.5 Magnitude Quake Hits Turkey 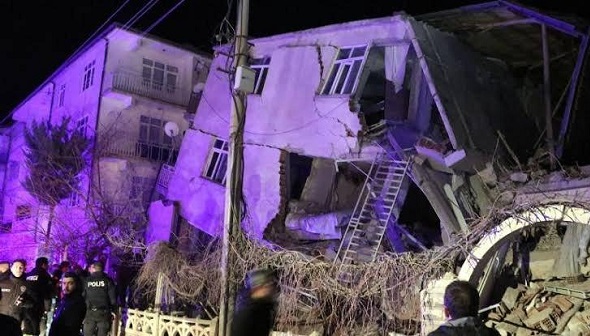 A powerful earthquake has killed at least 20 people and injured more than 1,000 in eastern Turkey, as rescue teams searched through the rubble of collapsed buildings for survivors on Saturday.

At least 30 people were missing following the magnitude 6.8 quake on Friday night, which had its epicentre in the small lakeside town of Sivrice in the eastern province of Elazig.

“It was very scary, furniture fell on top of us. We rushed outside,” 47-year-old Melahat Can, who lives in the provincial capital of Elazig, told AFP.

President Recep Tayyip Erdogan said all steps were being taken to aid people affected by the quake, which caused widespread fear.

“We stand by our people,” Erdogan said on Twitter.

The Turkish government’s disaster and emergency management agency (AFAD) said the quake hit Sivrice at around 8.55 pm (1755 GMT). Turkey lies on major faultlines and is prone to frequent earthquakes.

Interior, environment and health ministers, who were in the quake zone, said the casulties were in Elazig province and in the neighbouring province of Malatya, which lies to the southwest.