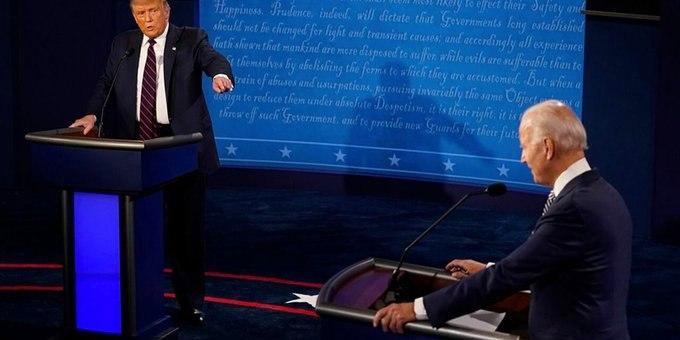 The first U.S. presidential debate between Republican nominee President Donald Trump and the Democratic challenger Joe Biden was marred with insults and taunts as Trump repeatedly interrupted his opponent with personal jabs on Tuesday.

Trump refused to condemn white supremacists who have supported him, and the as the debaters battled fiercely over the president’s record on the Coronavirus pandemic, healthcare, the Supreme Court nominee, integrity of the election results and the economy.

Trump bulldozed his way through the 90-minute debate by, often cutting and even talking over moderator Chris Wallace of Fox News.

The two White House contenders frequently talked over each other with Trump interrupting Biden so often, that he finally snapped and told the president: “Will you shut up, man? This is so unpresidential.”

Wallace tried to reel in Trump but got ignored.

“I think that the country would be better served if we allowed both people to speak with fewer interruptions. I’m appealing to you, sir, to do that,” Wallace said.

“You’re the worst president America has ever had,” Biden told Trump during a back-and-forth on taxes and even called him a “clown” twice.

“The fact is that everything he’s saying so far is simply a lie,” Biden said. “I’m not here to call out his lies. Everybody knows he’s a liar.”

He also side-stepped important questions when Biden attacked the administration’s handling of the pandemic, saying that the president “waited and waited” to take action and killing more than 200,000 Americans.

“He panicked or he looked at the stock market,” Biden said, referring to Trump’s decision to reopen states as he downplayed the threat of the pandemic.

Trump also spoke about his tax returns and insisted that he had paid millions of dollars but could not prove it since the audit was not completed, but insisted he had taken advantage of legal tax incentives as a businessman.