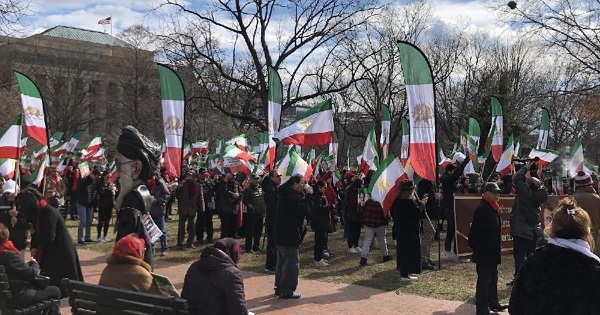 Hundreds Rally Near White House in Opposition to Iranian Gov’t

Demonstrators rallied near the White House to raise awareness for dissidents imprisoned in Iran.

A few hundred people gathered in Lafayette Park in Washington, D.C., at a Saturday event that was organized by those opposed to the government of Iranian leader Ayatollah Ali Khamenei.

The demonstration came the month after the United States conducted a drone strike that killed Iranian military commander Qassem Soleimani.

The demonstrators present showed support for the People’s Mujahedin of Iran, known as the MEK, the most prominent resistance group actively working to overthrow the Islamic Republic.

Retired Col. Wesley Martin, who was the senior anti-terrorism and force protection officer for coalition forces in Iraq, spoke at the event and pointed out the plight of protesters in Iran after hundreds were killed recently.