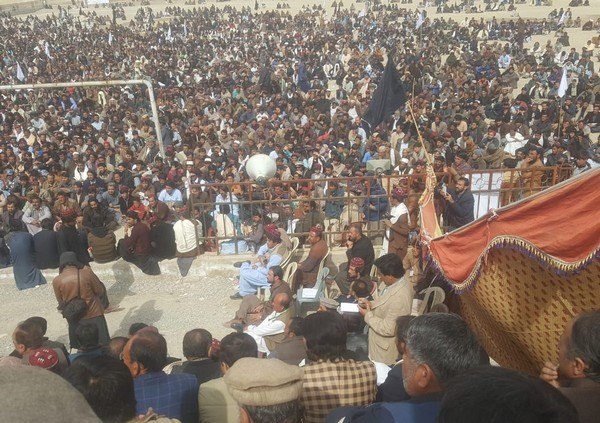 Thousands of Pashtun Tahaffuz Movement (PTM) activists and supporters held peaceful rallies in Loralai district and Karachi city of Pakistan, demanding the release of their leader Manzoor Pashteen, who was arrested last month on charges of sedition.

Videos shared on social media under the hashtag #PashtunLongMarch2Loralai show a large number of protesters participating in the rallies organized by the Pashtun Tahafuz Movement (PTM), a social movement which exposes the military offences and brings to the front the issues, which continue to plague the locals including enforced disappearances and fake encounters by the state.

Pashteen, the 27-year-old human rights activist and founder of PTM, was arrested last month along with nine other members of the organization and sent to 14-day judicial remand by the magistrate on the charges of sedition.

His arrest drew tens of thousands to rally across cities around Pakistan and worldwide, accusing the government and the Army of Human Rights abuses. It even drew criticism from European Foundation for South Asia Studies (EFSAS) — a European think-tank — who noted in its commentary that the arrest has engendered shock and dismay across Pakistan, as also internationally.

Holding banners and placards, the traders marched from the Peshawar Press Club and observed a sit-in outside the provincial assembly building to record their protest against nonpayment of compensation to them for their losses, as per a report by Dawn.

The demonstrators told reporters that hundreds of shops were damaged and destroyed in Miramshah Bazaar during a military operation but the federal government has not yet fulfilled its commitment to compensate the affected traders.