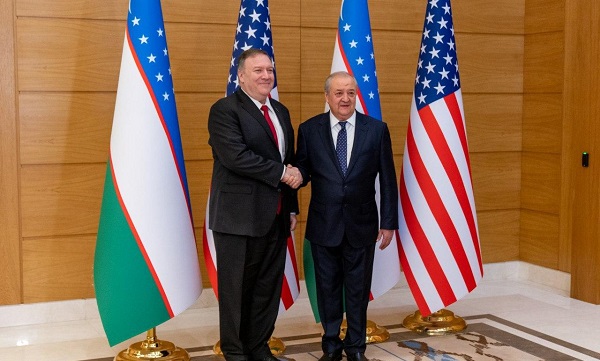 Pompeo Arrives In Uzbekistan For Final Stop Of Five-Country Tour

U.S. Secretary of State Mike Pompeo has been greeted by Uzbek Foreign Minister Abdulaziz Kamilov after landing in Uzbekistan’s capital, where he will conclude the last leg of his trip to Eastern Europe and Central Asia.

Pompeo is scheduled later on February 3 to take part in the “C5+1” meeting with his counterparts from Kazakhstan, Kyrgyzstan, Tajikistan, Turkmenistan, and Uzbekistan.

Pompeo arrived from Kazakhstan, where he met with President Qasym-Zhomart Toqaev and his predecessor, Nursultan Nazarbaev. He also met with Belarusian President Alyaksandr Lukashenka in Minsk on February 1 and Ukrainian President Volodymyr Zelenskiy in Kyiv on January 31.

He began his trip in Britain on January 29 and had meetings with Foreign Secretary Dominic Raab and Prime Minister Boris Johnson.