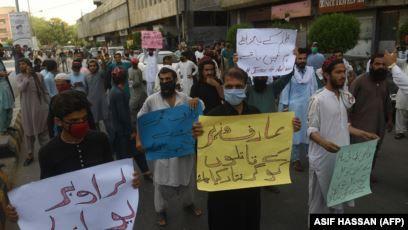 Tens of thousands of people in Pakistan have protested the assassination of a prominent ethnic Pashtun rights activist and political leader who some say was killed by state-backed militants in the South Waziristan tribal district.

Sardar Arif Wazir, one of the leaders of the Pashtun Tahafuz Movement (PTM), was traveling by car in the town of Wanna when unidentified gunmen opened fire on May 1. He died from injuries on May 2.

Wazir’s death prompted an outpouring of grief and frustration as peaceful protesters defied restrictions on gatherings because the coronavirus to hold demonstrations in several cities across the country on May 5, with the main protest held in Wanna, the center of South Waziristan tribal district.

“Our main message is to tell the world about how this happened and who did it, and how our state supports these terrorists, gives them weapons and protects them,” Mohsin Dawar, a leader of PTM, told RFE/RL’s Radio Mashaal.