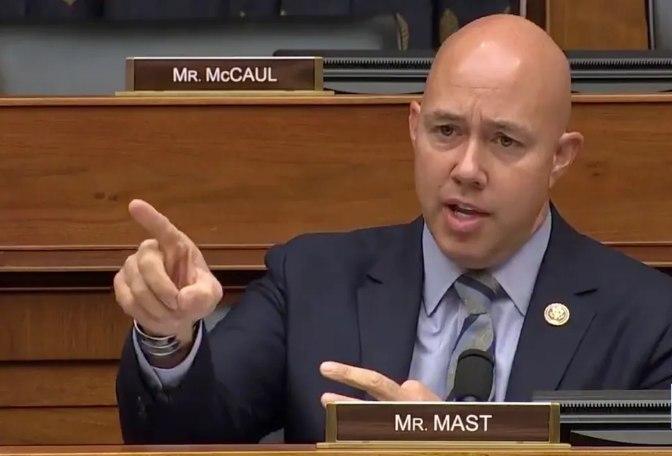 US Rep. Brian Mast who lost both legs and one finger after stepping on an IED during a mission in Afghanistan for Operation Enduring Freedom has made a statement to explain why Iranian Gen. Qassem Soleimani’s killing was justified.

During a US House Foreign Affairs Committee hearing, Mast demonstrated why Democratic criticism of Soleimani’s killing, which occurred from a U.S. airstrike on Jan. 3, is unfounded — resulting in nearly two minutes of dead silence.

“Some people might call this rhetorical, but I’m not going to ask it as rhetorical: There’s a number of my colleagues still remaining here. I am more than willing to yield to any of my colleagues that want to answer this question: If you walk out this hallway, and you take a right, and another right, and another right, you’re going to come to several beautiful walls that have the names of our fallen service members from the war on terror,” Mast said. “And I would ask, can any of you provide me one name on that wall that doesn’t justify killing Soleimani? I’ve got two minutes and 30 seconds. I’ll be more than happy to sit here and wait. Somebody provide me with a name on that wall that does not justify his killing.”

Mast fired back, “I’ve got two minutes remaining. I will sit here and wait for somebody to provide me with a name on that wall that does not justify the killing of Soleimani.”

“Thank you, Mr. Mast, I think you’ve made your point.” Engel replied.

The Florida Republican again told Engel that he had additional speaking time remaining, to which Engel responded by accusing Mast of being “out of order” and “disrupting the procedures.”

For nearly the next 90 seconds, the hearing sat in complete silence — and not a single Democrat was able to meet Mast’s challenge of naming a fallen American solider honored on the walls just outside the committee’s hearing room.

“I will note that there was no response of one name offered that did not justify the killing of Soleimani,” Mast said.