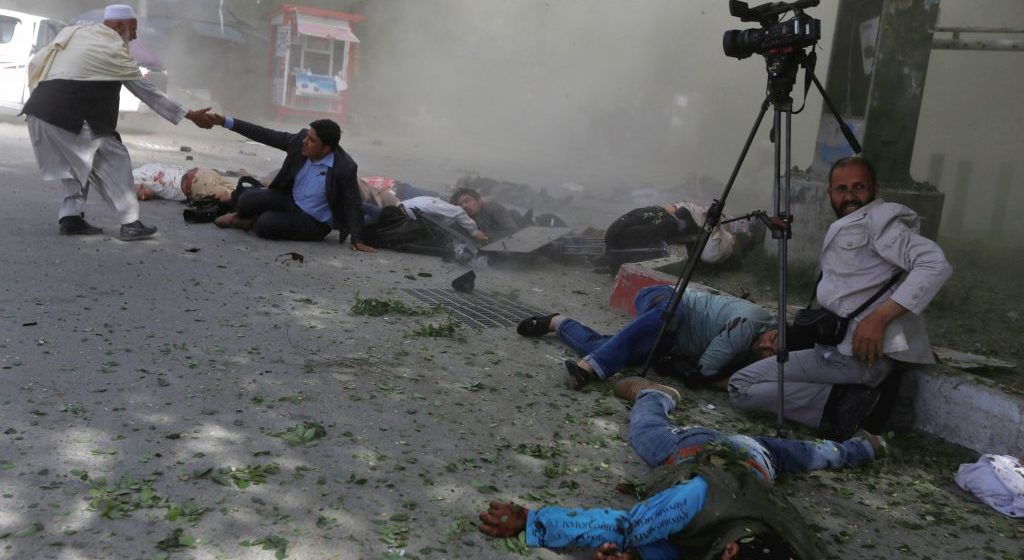 The April 30 suicide bombing that murdered nine photographers, cameramen and reporters in Kabul was the latest vicious attack in a broad and systematic effort to silence what was once seen as Afghanistan’s biggest post-Taliban success, the development of a fearless media sector as a beacon of free speech amid a regional landscape of oppression.

That light has been fading for some years, as the power of journalism has dawned on Afghanistan’s corrupt and criminal. April 30 compounded a recent history of intimidation, harassment, beatings, shootings, bombings and murders, not only by insurgents but also security forces, politicians, warlords and others who prefer to operate in the shadows of one of the most corrupt nations in the world.

As death stalks journalists who dare to probe that filthy underbelly, fewer are willing to take the risks now inherent in doing their jobs. The fallback is breaking-news coverage of violent incidents as the war escalates; in-depth and investigative reporting can be counted among the casualties of this never-ending war.

The attack on April 30 was cynically orchestrated to murder as many journalists as possible — the bomber wearing a media ID, mingling with journalists as they covered an earlier attack, the bomb secreted in a “camera”. The atrocity was the first mass killing of journalists since 2001. Claimed by the so-called Islamic State group, it made clear that newsmen and women are legitimate targets for terrorists.

On the same day, a BBC reporter was shot dead a few hundred miles east, in Khost province. A week later, in Kabul, a freelancer whose specialty is exposing corruption was shot as he left his home. He lived.

Massoud Hossaini, Pulitzer prize-winner and chief photographer in Kabul with the Associated Press, also survived an attack, on March 28, when unknown gunmen fired automatic weapons at his vehicle.

Human Rights Watch examined the issue in 2015, and reported that “many journalists shy away from reporting on the most important issues that face Afghanistan, and thus put at risk many of the gains in media freedom that have emerged since 2001.” https://www.pri.org/stories/2015-02-23/afghanistan-news-media-under-attack-government-and-taliban

As more journalists choose against the dangers that now appear inherent in the job, this once-bright spot in Afghanistan’s 17 years of development is fading amid questions about whether a continued commitment to the craft is worth the risk.

After past incidents, including the March 28 attack on Hossaini, Kabul’s press corp have collectively asked the government for protection. Now, said Sharif Hassan, a Washington Post correspondent, “we know the government cannot protect us. How can they? We have to be our own protectors.”

The AFP representative announced that the agency will no longer dispatch reporters or photographers for spot cover of attacks. No pictures, no video, a staffer told me. They’ll interview victims in hospitals, and visit attack sites only the day after.

That’s a sea change for coverage of the war. “No others have made that decision yet,” Hassan said. “Some said we shouldn’t give up. Everyone is shocked.”

The Taliban have a history of threatening and attacking media employees. In 2016, they made good on a promise to Tolo TV and blew up a bus taking production staff home, killing seven. It followed a Tolo report on the Taliban, which station executives acknowledged was wrong but refused to retract.

For years, journalists have worked with the Taliban, who are savvy about getting their message out, even if it is often wide of the truth. Recently, they’ve allowed reporters to journey onto and report from their turf.

With the arrival of a new player, the rules have changed but no one knows what they are. “With ISIS, we don’t know how to negotiate with them,” said Hassan, referring to the Islamic State group. “The problem with ISIS is that they don’t have an address, and they never negotiate.”

Hassan, 28, returned to Kabul early this year after gaining his Master’s degree in journalism at City University of New York and an 11-week internship with the Washington Post, “one of the best newsrooms in America, probably the world.”

He is Hazara, a Shia ethnic minority often attacked in predominantly Sunni Afghanistan. “I thought it would be an interesting time to cover these attacks and give a voice to millions of voiceless Afghans,” he said. “We know the foreign media are not really covering Afghanistan as they were even just five years ago. I thought I could do it. It was a hard decision, but I made it.

“I have no regrets. Not yet.” The April 30 attack had helped him set limits. “I’m usually the guy who rushes to the scene of attacks and bombings, to take photos and do interviews. We got an email from the foreign editor of the Post to be very, very careful. But I may not go, or just go very quickly, take some photos, do some interviews and leave as soon as I can. It depends on our personal decision.

“My decision is to be careful.The greatest story of all time is not worth it if you’re at risk. Safety is first.”

Reporters Without Borders ranks Afghanistan at 118 on its Press Freedom Index, of 180 nations. It put the number of journalists killed in 2017 at 15, “many in targeted attacks on the media.” Conditions for journalists were deteriorating, it said, as many officials were “unable to accept the principle of media independence, and the police and military have been implicated in several cases of violence against journalists.” The Taliban and Islamic State had created what RSF called “information black holes” across the country. https://rsf.org/en/afghanistan

NAI, an independent free-media advocacy group, said it had recorded 21 journalists’ deaths in 2016, and registered 141 cases of violence against news professionals.

Window-rattling blasts regularly punctuate life in Kabul. In the city’s many news rooms, they trigger a rush to the scene for photographs, video and interviews, phone calls to officials, and the wait for a claim of responsibility. At the AP bureau, a four-story building on a hilltop, we would run to the roof to scan the horizon for the plume of smoke that would hint at the target.

On those occasions when someone we know, work with, or love is a victim — like AFP correspondent Sardar Ahmad, murdered with his family during a siege in 2014 — duty makes way for heartbreak, along with that horrible awareness of our own mortality. The danger is always close. With the April 30 attack, it hit home yet again.

Frud Bezhan decided after his last visit to the country of his birth that “no story is worth dying for,” and so covers Afghanistan from Prague, capital of the Czech Republic, for Radio Free Europe/Radio Liberty. The network lost three people in the April 30 attack.

Working at such distance from the day-to-day dangers “makes me feel uncomfortable at times,” he said.

Bezhan, 30, left Afghanistan with his family when he was a child, and grew up in Australia. After his last reporting trip, in September 2017, he noticed a deterioration “not just in security, but there was a helplessness and hopelessness in Kabul. I didn’t feel I should be there and reporting; it wasn’t worth risking my life for.”

Bezhan noticed, too, that news coverage was increasingly relying on incidents of violence instead of probing issues like corruption, poverty, criminality, human rights abuses.

“Some fear they will be frozen out,” said Bezhan of the soft-peddling on stories on major issues. “There are way more important stories. Editors and supervisors are too willing to put their journalists in danger; they need to know that no story is worth dying for,” he said.

Like Hassan at the Washington Post, Massoud Hossaini has been that guy rushing toward danger for more than a decade, first for AFP where he worked with Shah Marai for seven years, and now with AP. Photos from April 30 show him in the background, his long black hair tied back and his bright blue shirt outside his jeans.

Hossaini won his breaking-news Pulitzer in 2012 with a photo of a girl in green satin clothing shimmering in the sun, her hands splayed, her mouth open in a scream, her family dead and mangled at her feet after a suicide attack at a Shia shrine.

He’s hardly taken a good photo since, as post-traumatic stress disorder pushes him deeper into depression.

With the March 28 attack, he said, the odds had turned against him and he knew it was time to “get out alive”. He went to India briefly, but returned for exams at the American University of Afghanistan, where he’s doing a part-time Bachelor’s degree in English. The university refused to allow him to sit his exams outside the country.

Finding help to get him out of the country has been difficult, even though he is an obvious target for killers and kidnappers. Universities the world over have refused to give him a place to continue his degree. Organisations set up to assist journalists in danger have done little more than express sympathy. His bosses have offered no alternative posting or access to therapy. Massoud’s condition has been worsening since he was caught up in a siege at the American University in 2016, while in class.

“I’m getting badly depressed and I’m fighting with it now,” he said after the April 30 attack. “I can’t think about anything.”