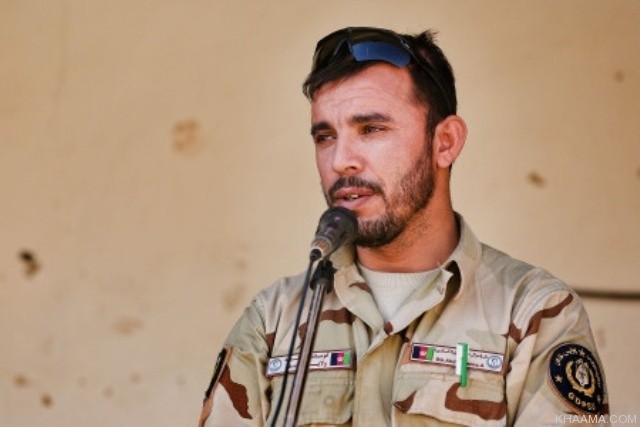 I was introduced to Abdul Razeq Khan in 2006. Our contact and friendship continued till last days of his life. A number of brilliant military-political figures who have risen in the history of Afghanistan to defend it have not been a result of academic institutions; rather they have risen from among the public. General Razeq, who is known by this short name, was one of the latest figures who had not learnt the art of fight, management and politics in an academic class, rather he had learnt it among people drowned in crises. Undoubtedly, these charismatic figures had unique characteristics which included talent and bravery.

However, there should be a situation and time which provides an opportunity for the owner of those talents and skills to maximize them. I don’t exactly know what connections or merits helped him to join security forces, but I know that when he joined this formation, two factors caused his power, fame and popularity achievements. First, Mr. Karzai, former president of Afghanistan, who rigorously needed a popular, brave, and smart ally in security sector among Kandaharis. He (Karzai) was disappointed by Kandahari ideologists in this section. Second, martyr General Abdul Razeq’s unique talent.

Although, I am a critic of some parts of Mr. Karzai’s views and politics and I don’t agree with him much, but if we look at it impartially, the rise of General Rezeq was mostly because Mr. Karzai had paved the way for him. However, like any other connections throughout the history, General Rezeq’s relationship with Mr. Karzai had gotten cold and turbulent at least in the last two years. For instance, he strictly/vividly rejected Mr. Karzai’s words regarding reconsideration of BSA and said that his words are in line with favors of the strangers.

Majority of politicians tried to use him as a local and supportive, and as a political player for themselves, but Gen. Rezeq was able to get past each of them and represented Kandahar in many issues. For instance, one can point out his negotiations with each of the possible presidential candidates, National Coalition leaders, embassies and even foreign leaders.

Although he was Kandahar’s Police Chief, he was actually the senior minister for a zone in Afghanistan, whose political and tribal network’s influence extended beyond administrative unit of Kandahar. His absence has, no doubt, left a vacuum in great Kandahar, and his replacement will have a lot of issues. His brother, Tadeen Khan’s capabilities (who has succeeded him as police chief) hasn’t been experimented with yet and it’s too early to judge. If Martyred Gen. Rezeq had been Kandahar’s Police Chief only, his brother wouldn’t have succeeded him, but Tadeen Khan’s appointment indicates central administration’s acknowledgment of the political role of Martyred Gen. Rezeq.

Kandahar is an important corner and historically significant place for Afghanistan, and its core presence in power and politics during the past three centuries have provided the region’s politicians and figures with a distinctive perspective, which sometimes operate better in a more organized manner in comparison to others. Generous behavior of Gen. Rezeq in politics and administration opened his doors into the public’s hearts and mobilized people around his axis on emotional basis. Afghan people adore generosity and the generous. He had these qualities. He had widely made government administration available to the public, which rarely happens in other parts of Afghanistan.

After a while, it will be clear whether Tadeen Khan can fill his brother’s gap or whether Kandahar’s political and ethnic elders have only supported him to push his group’s interests and pressured/ reduced him to a nominal and symbolic official.

It sometimes happens that the charismatic and graceful characters do not left their charisma and gracefulness behind, and whatever they have, they take it with themselves. There is a dangerous possibility that a strong structure would’ve not been left as a legacy of the late General Rezeq and everyone could become the police commander [of Kandahar], without a captive of political attraction from people and among people.

In any case, the current state of Afghanistan is such that cannot manage Kandahar’s micro leadership from Kabul. In fact, we cannot run any of Afghanistan provinces this way. One of the reasons for the weakness inside the Afghan government is that the Kabul based leaders are trying to run the provinces with micro management. This method creates stagnation, unless someone like General Rezeq challenges and frees himself from the defined cage. No one can fill an exceptional character’s gap in history, and the late General Rezeq will also not be excluded, but, at the same time the wheel of history does not end with the absence of anyone. Now, let’s see that the Kandahar’s elders will act in role of owners(King Mohammad Zahir after the murder His father King Mohammad Nader) and will not overran his successor will work from backend or the situation will be so that it is in other parts of Afghanistan, and spread in Kandahar as well?

This article was first published in 8am.af. Reporterly has translated this and republished it in English. The views and opinions expressed in this piece are those of the authors entirely and do not necessarily reflect that of Reporterly.