Over 9000 Tons of Food Supplies Imported to Afghanistan Through Railroads

The Afghan government announced on Tuesday that 9,014 tons of food supplies have been imported to the country via railroads. This comes as coronavirus sends food prices soaring in major cities in Afghanistan.

According to statement from the railroads department, 215 wagons of goods have arrived through Hairatan-Mazar, Aqina and Torghandi railroads. Of the 215 wagons, 139

President Ashraf Ghani has met with the Acting Interior Minister Masoud Andarabi and discussed campaign against the coronavirus pandemic. 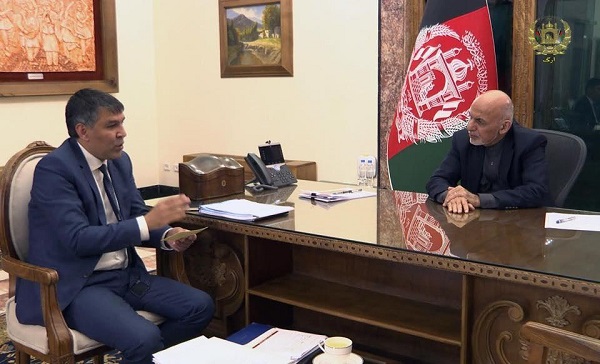 The Presidential Palace in a statement said that President Ghani has ordered that the necessary measures should be taken to prevent the spread of coronavirus in Police ranks. This comes as the total number of confirmed cases in

Special Representative of the President of Uzbekistan for Afghanistan, Ismatulla Irgashev, has met with the Ambassador Extraordinary and Plenipotentiary of the Republic of India Santosh Jha. The Ambassador noted the relevance of the fight against coronavirus, information was also provided on the security measures taken by the Indian side, as well as expressed readiness to closely cooperate with the Uzbek side in this direction.

As the world is fighting to fight the coronavirus, the European Union has called for halt to fighting in view of the growing threat of coronavirus that has also affected people in the war-ravaged Afghanistan. Taliban have been observing ceasefire with foreign forces since they have signed an agreement with the US on Feb. 29, however, they have stepped up attacks on Afghan forces