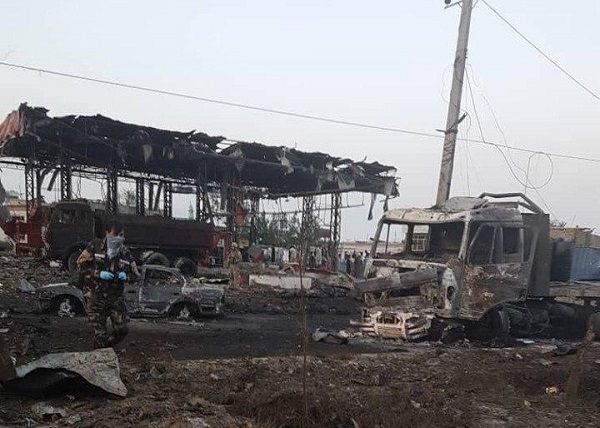 The Taliban has claimed responsibility for the deadly car bomb explosion that rocked the Afghan capital Kabul on Monday night, killing at least 16 people and wounding 119 more and shaking windows and doors in houses several kilometers away from the blast.

The blast occurred close to Green Village, a large compound used by staff of international organizations, it was followed by a second, smaller explosion that occurred as generators inside the compound blew up, according to sources.

Interior ministry spokesman Nasrat Rahmi said 16 civilians were killed and around 119 wounded, but said the toll could rise because a number of homes were destroyed.

Rahimi confirmed that the target of the blast was the Green Village compound, which houses several international organisations and guesthouses. The explosion started a domino effect as it sent a cloud of smoke into the night sky over Kabul and caused a nearby gasoline station to burst into flames.

MoI further confirmed that five attackers who were hidding to enter the camp were shot and killed before they reached to their target.

He added that at least 400 foreign nationals were rescued from the Green Village compound by police after Taliban attack.

Zabihullah Mujahid, Taliban’s main spokesman, said the attack had targeted foreign forces. He said a car bomber had blown himself up and multiple attackers had stormed the compound.

The blast happened during the final minutes of a nationally televised interview with US envoy Zalmay Khalilzad on what a US-Taliban deal might mean for Afghanistan’s future.

Earlier on Monday, Khalilzad showed a draft deal to the Afghan president after declaring that they are “at the threshold of an agreement” following the end of the ninth round of US-Taliban talks in Qatar. The agreement still needs Donald Trump’s approval.