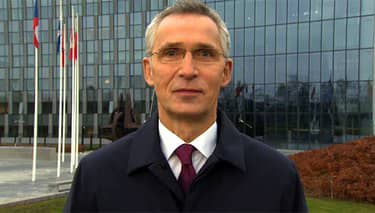 2021 Is A Pivotal Year for NATO to Decide on Presence in Afghanistan: Stoltenberg

NATO Secretary General Jens Stoltenberg at a joint press point with Alexander Dobrindt, Chairman of the CSU Parliamentary Group has said that the year 2021 is a pivotal year for NATO to decide on presence in Afghanistan.

A statement issued by the Resolute Support said that NATO Secretary General has welcomed the peace talks that take place between Taliban and the government in Kabul.

“There are many challenges, and many uncertainties, but of course, the peace talks are the only path to peace, the only way forward to a peaceful negotiated solution.
We support those efforts, but at the same time we know that we will be faced with a very difficult dilemma,” Stoltenberg said.

NATO SG emphasized that the more important thing is that they need to make sure that Afghanistan doesn’t once again become a safe haven for international terrorists.

“We have to understand that the reason why we went in to Afghanistan back in almost 20 years ago was the attack on a NATO ally, the 9/11 against the United States, and Taliban has the committed in the agreement with the United States to make sure that they don’t work with, they don’t support, they don’t help in any way provide any framework support for international terrorists,” he said.

“We will of course assess the situation on the ground, we will assess the development in the peace talks and then make our decision. We have to be honest and say that that will be a dilemma, it will be difficult. It is, of course, a challenge to stay,” Stoltenberg added.

NATO Secretary General also welcomed the strong commitment of Germany, to mission in Afghanistan, saying Germany leads the NATO presence in the north, and it really understands that “Our presence in Afghanistan is about protecting ourselves, our own countries against terrorist attacks.”