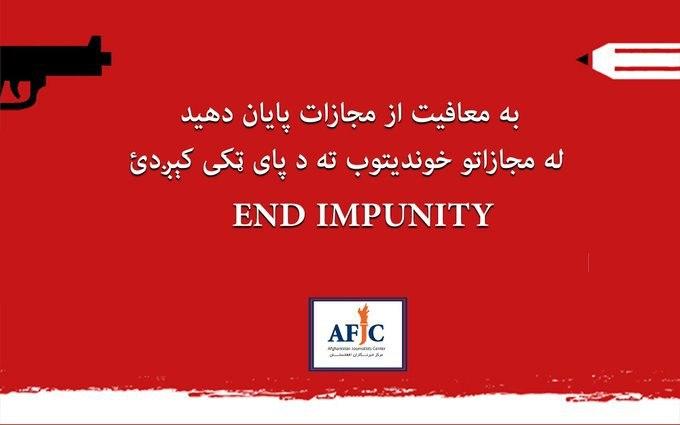 95% of Crimes Against Journalists and Media Go Unpunished in Afghanistan: AFJC

The Afghanistan Journalists Center (AFJC) said that of the more than 1,000 cases of violence and threats against journalists have been recorded since 2001, only six have received a final verdict, showing that the culture of impunity for these crimes is almost 95%.

More than 200 Afghan Journalists jointly urged President Ashraf Ghani in an open letter to pay attention to the safety of media professionals and to seriously follow-up on the cases of violence against them, especially those that resulted in killings.

The letter said that the efforts of the Joint Committee of the Government and the Media to investigate and prosecute threats and violence against journalists were “insufficient” in bringing the perpetrators to justice.

The findings of the Afghanistan Journalists Center (AFJC) and its partner organisations showed that in the past two decades, more than 1,000 cases of violence and threats against journalists have been recorded of which 115 cases led to the death of journalists and media workers. Four of those cases occurred in the first half of 2020.

Statistics released by the Attorney General’s Office show that only 31 cases of deaths of journalists and media workers have been processed so far, with only six receiving a final verdict.

“This data clearly underscores that culture of impunity for crimes against journalists and media personnel is in practice by almost 95%,” the letter said.

The reporters who signed the letter called on Ghani to prioritize the safety and security of the media, and to seriously follow-up on the cases of violence against journalists, especially those cases that resulted in deaths.

They demanded that the Afghan government follow-up the cases and present a workable timetable for further action to bring the perpetrators to justice.

As most cases of crimes against journalists and media workers were attributed to “terrorists and illegal armed groups,” the writers said if the perpetrators were dead, then their associated groups or organizers must be identified and brought to justice.

They demanded that legal actions, with no exception, must be taken against any government officials, security personnel and warlords who are accused of committing violence and threats against journalists.

They also asked for the establishment of an online database to follow-up the legal proceedings and provide regular and updated information on the status of each case of violence and threat against journalists.

Correspondents who signed the letter stressed that the president and government leaders should declare their firm and lasting political commitment to supporting journalists and the media in Afghanistan and reassure those involved, that “violators of the law and perpetrators of crimes against journalists will be prosecuted in accordance with the rule of law.”

International organisations and diplomatic missions in Kabul such as the UN Assistance Mission for Afghanistan (UNAMA), UNESCO, EU Delegation to Afghanistan, Committee to Protect Journalists (CPJ), Reporters Without Boarders (RSF) and the Pulitzer Center on Crisis Reporting, were also included.