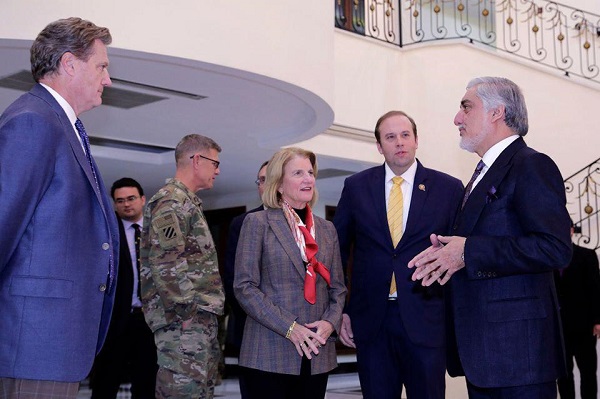 Abdullah’s Meeting with US Congressional Delegation. Future of Democracy Depends on Presidential Election

The Chief Executive Abdullah Abdullah has met with a high-ranking delegation of US congress in Kabul.
The Chief Executive Office in a statement said that CE Abdullah met the US delegation led by Senator Joni Ernst, the deputy of Resolute Support forces and John Bass, US Ambassador to Kabul on Sunday night.
According to the statement, Abdullah and the US delegation discussed over the fate of Afghanistan elections,
the peace process, bilateral cooperation and fighting against terrorism.
At the meeting, the chief executive appreciated US assistance to Afghanistan, called peace a priority for the Afghan people, and welcomed efforts by the United States and its allies to achieve peace.

He expressed hope that the recent measures would pave the way for direct talks between the Afghan government and the Taliban.

The chief executive added that fraudulent Afghan elections are being systematically used Which is no longer acceptable to the Afghan people, and the election results must be respected by law and based on the clear vote of the Afghan people and announced by the responsible authorities.

Abdullah also emphasized the role of regional countries in establishing lasting peace and stability in Afghanistan important and added that regional consensus should be considered in any effort to achieve peace.

The statement added that Senator Joni Ernst also welcomed the positive developments in Afghanistan in recent years.
He praised the US and Afghan Armed Forces’ victims in the fight against terrorism.