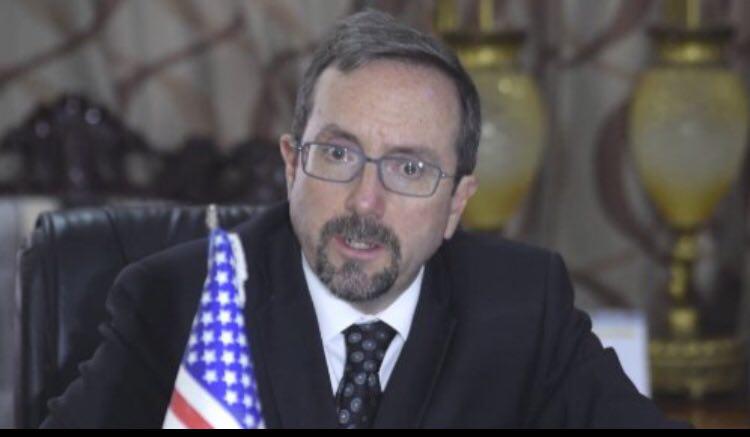 The US Ambassador in Kabul, John Bass, who visited the northern province of Balkh on Saturday, talking to TOLO news said that both election and peace are important but peace in Afghanistan is the “highest priority” for the United States because it is the highest priority for the Afghan people as well.

The ninth round of peace talks between the US and the Taliban began on Thursday, August 22, with the hope that the two sides will reach a final agreement on four key issues under debate, mainly the withdrawal of foreign forces from the country and intra-Afghan negotiations.

The Afghan presidential election is scheduled for September 28, but some presidential candidates and politicians have recently expressed their skepticism on whether the polls will be held on its scheduled time.

Mr. Bass said the Afghan election should be held on its scheduled time if there is a hurdle in the way of the peace process.

“Both are important for the United States. Peace is our highest priority because it is also the highest priority of the Afghan people. And every day, we have Afghans telling us that peace is their highest priority,” Mr. Bass said. “So, we are working very hard to create that opportunity for Afghans to sit together, to negotiate, to work out their differences and to try to achieve a durable peace agreement which is accepted by most of the people of this country and is therefore implemented.”

When asked about US forces withdrawal from Afghanistan, Mr. Bass said that the United States and its allies will have confidence that there will be no threat against other countries from Afghanistan.

“My government and other governments have a confidence that we will not face terrorist attacks from inside Afghanistan in the future and if the Talibs want to see intentional forces depart, then they are going to have to demonstrate how it is that they will help ensure that there are no future terrorist threats against the United States or our allies and partners from Afghanistan,” he said.