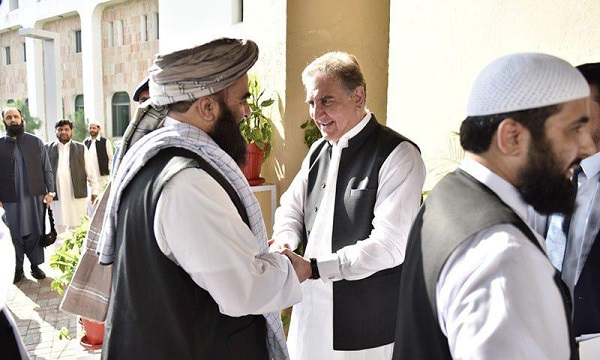 After arriving in Pakistan, a high-level Afghan Taliban delegation met with Pakistani Foreign Minister Shah Mahmood Qureshi in Islamabad on Thursday, according to a press release issued by the Pakistan’s Foreign Office.

The delegation was received by Qureshi. During a meeting with the Pakistan’s foreign minister, they discussed the regional situation, the Afghan peace process and other issues of mutual interest.

On Wednesday, the Pakistan’s FO said that an Afghan Taliban delegation was to visit Islamabad to review the progress made so far under the stalled US-Taliban peace talks.

“Pakistan has extended an invitation to Taliban Political Commission (TPC) in Doha for a visit,” the Pakistan’s FO statement had said.

Earlier, Taliban spokesperson Suhail Shaheen had said Mullah Abdul Ghani Baradar, a co-founder of the Taliban and head of their political office in Qatar, would lead the delegation during talks on important issues with Pakistani officials in Islamabad.

The Taliban’s Doha-based spokesman, Shaheen had told AFP that the simultaneous visits to Pakistan of US peace envoy Zalmay Khalilzad and the Taliban were a “coincidence”.

A Pakistani Foreign Ministry statement said the Taliban visit would provide the opportunity “to review the progress made under U.S.-Taliban peace talks so far, and discuss the possibilities of resuming the paused political settlement process in Afghanistan.

Shaheen told VOA that Mullah Abdul Ghani Baradar, the deputy Taliban chief for political affairs and head of the group’s office in Qatar, is leading the Taliban delegation, saying it comprises members of the team that held nine rounds of peace negotiations with the U.S. side.

Shaheen said in their meetings with Pakistani foreign ministry officials, Taliban delegates will discuss “a wide range of key issues” and the fate of the defunct peace deal with the United States.

He asserted that the American side has backtracked from the peace deal, but that the Taliban “still stands by it steadfast” and wants to conclude it to carry the Afghan peace process forward.

“If someone is interested in a resolving the conflict in Afghanistan, the agreement we have worked out after a yearlong effort offers the solution,” Shaheen said.

But he warned that if the other side remains focused on using military force to seek a solution the war in Afghanistan will go on as it has been for the last 18 years, saying the Taliban is determined to fight until the country is freed from the “foreign occupation.”