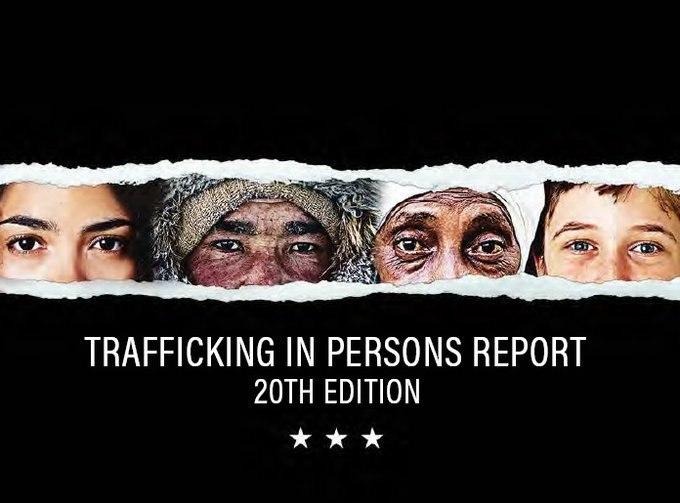 In the latest Trafficking in Persons (TIP) report published by the U.S. Department of State, the government of Afghanistan was downgraded for not meeting the minimum standards for elimination of human trafficking.

It notes: “The Government of Afghanistan does not fully meet the minimum standards for the elimination of trafficking and is not making significant efforts to do so; therefore Afghanistan was downgraded to Tier 3.”

Countries whose governments fully meet the Trafficking Victims Protection Act (TVPA) minimum standards are categorised in the top Tier-1. Countries who do not meet the minimum TVPA standards but are making efforts, are Tier-2, while those in Tier-3 are the worst off.

On the release of the report, U.S. Secretary of State Mike Pompeo said, “There are 25 million adults and children suffering from labour and sex trafficking worldwide. The desecration of the inherent value and immeasurable worth of human beings and for each of us human beings in the face of God makes human trafficking a truly wicked act.”

Despite the “lack of significant efforts,” the Afghan government took some steps to address trafficking, including continuing to identify trafficking victims, prosecuting and convicting some traffickers, including two for bacha bazi and kidnapping, and conducting four trainings for provincial antitrafficking officers.

In response to allegations of the sexual abuse and sex trafficking of 165 boys in Logar, an Attorney General’s office (AGO) investigation was able to identify 20 perpetrators, which led to some arrests and convictions.

However, the report notes, “there was a government policy or pattern of sexual slavery in government compounds (bacha bazi) and recruitment and use of child soldiers.”

The report adds that despite local officials’ widespread acknowledgement of officials recruiting children, something that has been categorically denied by the government, there have been no prosecutions against a police officer for the crime.

“The government’s lack of resources and lack of political will to hold perpetrators accountable diminished enforcement of anti-trafficking laws. The judiciary remained underfunded, understaffed, undertrained, and in some cases ineffective, and judicial officials were often intimidated by perpetrators or corrupt,” the report notes.

Under Tier 3 restrictions, which Afghanistan falls under, the U.S. shall not “provide non-humanitarian, nontrade-related foreign assistance” to the country, according to the TVPA.

The President of the U.S. has the final authority on deciding whether and to what extent they will impose foreign assistance restrictions on Tier 3 governments, and may decide to waive restrictions for one or more projects, programmes or activities.