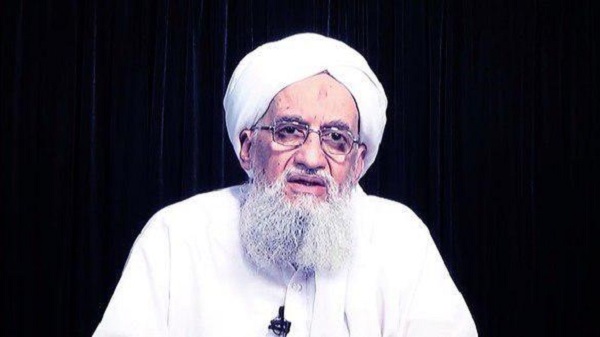 To mark the 18th anniversary of the September 11 attacks, the Al Qaeda leader Ayman al-Zawahri called on Muslims to attack U.S., European, Israeli and Russian targets in a speech.

As per Fox News report, Multiple intelligence and terrorism monitoring services intercepted the video, in which Zawahri is said to condemn the “backtrackers” from jihad.
He decries jihadists who “reformed” in jail or who have said that the 9/11 attacks were not to be lauded because innocent civilians were harmed.

The coordinated Al Qaeda hijackings on Sept. 11, 2001, claimed the lives of almost 3,000 people. Two civilian airliners struck both towers of the World Trade Center, another hit the Pentagon, and a fourth plane crashed in rural Pennsylvania after passengers overran the Al Qaeda hijackers.

Alongside ISIS leader Abu Bakr Al Baghdadi, Zawahri is one of the two most wanted men in the world – both have a $25 million U.S. bounty on their heads.

Egyptian-born Zawahri, 67, took the reins as Al Qaeda’s leader after the Navy SEAL raid that killed the group’s long-running mastermind, Usama bin Laden, more than eight years ago. He also comes with a long list of pseudonyms, including “The Doctor” and “The Teacher.”
His whereabouts are unknown, but the elusive terrorist is widely speculated to be in the rugged Afghanistan-Pakistan border region.

And even though the world’s eyes have been fixed on the rise and fall of ISIS as the world’s most dangerous terrorist outfit, experts and analysts caution that Al Qaeda has been quietly curating a revived global game plan that will likely prove far more resilient and lethal.

“Al Qaeda is better known for the long game, waiting out time and seemingly just looking on as ISIS rises and ultimately falls,” said Raphael Gluck, founding partner of monitoring site Jihadoscope. “So for the intelligence community, silence isn’t a sign of terror receding. It is almost as if it is Al Qaeda’s game plan.”