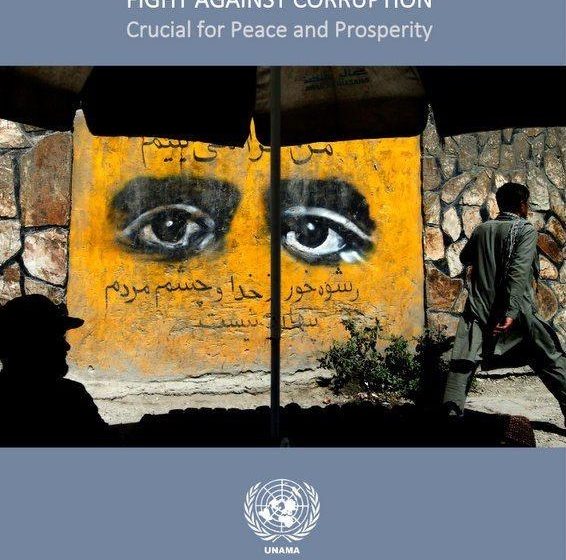 Anti-Corruption Reforms Must Remain a Priority in Afghanistan: UN Report

The report describes how anti-corruption reforms slowed in 2019 due to the Presidential election, with fewer legislative and strategic initiatives undertaken to fight corruption than in previous years.

Before the election crisis was resolved, the COVID-19 pandemic distracted the government and further slowed the anti-corruption reforms.

The report outlines how Afghanistan’s 2017 anti-corruption strategy, which was a temporary policy document, ended without a successor. The Special Secretariat for Anti-Corruption is now working to assess the outcomes of the 2017 strategy so the government may build on it.

In addition, the report notes, the institutional gaps left by stalled progress in both strategy and implementation were not filled by the expected establishment of an independent anti-corruption commission.

“Legislative activities overall and on anti-corruption issues in particular slowed and were reduced to amending laws and developing by-laws rather than adopting new legislation,” the report says as it points to the September 2018 Anti-Corruption Law that is yet to be established.

The report also talks about the status of the current anti-corruption bodies within the government and paints a dismal picture of institutional inefficacy.

The Ombudsperson’s office was inaugurated in the second half of 2019 and has yet to consolidate its legal foundation and begin its functions.

The High Council for Rule of Law and Anti-Corruption met only seven times in 2019 instead of monthly and has yet to catalyse any reforms.

The report also acknowledges notable areas of progress, such as the Anti-Corruption Justice Centre (ACJC) enhancing its ability to prosecute and adjudicate high-level corruption cases. They held more than 23 trials last year, however the high rejection rate of the indictments persists. Their weak law enforcement support also meant that they failed to execute all 255 arrest warrants that were pending.

The Independent Administrative Reform and Civil Service Commission was the only body that was able to advance steadily and bring reforms in public administration.

“Anti-corruption efforts and integrity reforms must be key priorities for Afghanistan’s leadership, especially so given the country’s pressing challenges and opportunities around peace and development,” said Deborah Lyons, the UN Secretary-General’s Special Representative for Afghanistan.

“Addressing the COVID-19 crisis and building a peaceful, healthy and prosperous Afghanistan requires integrity and accountability – fundamental principles for the future of any nation.”

The report makes several recommendations to Afghanistan’s government, recognizing that its previous anti-corruption efforts had yet to positively impact the lives of most Afghans, and concludes that, notwithstanding the many legal and policy reforms that have been undertaken, corruption remains one of the most significant obstacles to Afghanistan’s long-term peace and prosperity.

“Additional progress in all areas of the fight against corruption is crucial, as the international community faces daunting economic challenges that continue to draw attention away from Afghanistan,” said Lyons, who is also head of UNAMA. “The upcoming development coordination conference in Geneva is expected to reinvigorate much-needed international support to Afghanistan, but the country needs to make further headway in battling corruption.”

The report recommends that the government develop a realistic long-term strategy that builds on past achievements; that the anti-corruption commission be swiftly established; that the law-enforcement capacity dedicated to corruption investigations and related arrests be boosted; that oversight and management of public resources be strengthened; and that justice sector reforms be prioritized by fostering judicial independence.