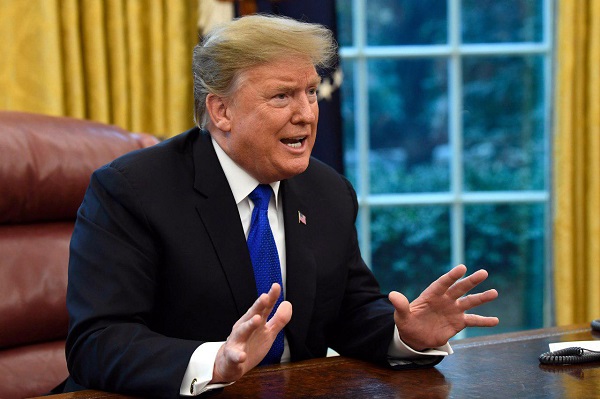 U.S. President Donald Trump says he has called off secret talks that were to be held Sunday at Camp David with Afghanistan President Ashraf Ghani and “major Taliban leaders.”

“Unbeknownst to almost everyone, the major Taliban leaders and, separately, the President of Afghanistan, were going to secretly meet with me at Camp David on Sunday,” Trump said in a tweet.

Trump tweeted that he called off the talks with the Taliban after the insurgent group admitted to an attack in Kabul that killed 12 people, including one US soldier.

“What kind of people would kill so many in order to seemingly strengthen their bargaining position?” Trump said in the tweet.

“If they cannot agree to a ceasefire during these very important peace talks, and would even kill 12 innocent people, then they probably don’t have the power to negotiate a meaningful agreement anyway,” he continued.

Taliban have recently launched fresh assaults on the northern cities of Kunduz and Pul-e Khumri over the past week and carried out two major suicide bombings in the capital Kabul.

One of the blasts, a suicide attack in Kabul on Thursday, took the life of US Army Sergeant 1st Class Elis A Barreto Ortiz, 34, from Puerto Rico, bringing the number of American troops killed in Afghanistan this year to 16.

On Twitter, Taliban spokesman Zabihullah Mujahid claimed responsibility for the attack, saying a “martyrdom seeker” – or suicide bomber – had triggered the car bomb and that “foreign invaders” were killed.

Washington had hoped that a withdrawal of US troops would lead to negotiations between the Taliban and Kabul on a more permanent peace.

Earlier this week, US and Taliban negotiators struck a draft peace deal which could lead to a drawdown in US troops from America’s longest war. But a wave of Taliban violence has cast a long shadow over the deal.

“It is particularly unhelpful at this moment in Afghanistan’s history for the Taliban to ramp up violence,” McKenzie, head of US Central Command, told reporters traveling with him.

McKenzie said for the peace process to move forward, “all parties should be committed to an eventual political settlement” which, in turn, should result in reduced violence.

“If we can’t get that going in, then it is difficult to see the parties are going to be able to carry out the terms of the agreement, whatever they might or might not be,” McKenzie said.

Under the draft accord, thousands of US troops would be withdrawn over the coming months in exchange for guarantees Afghanistan would not be used as a base for militant attacks on the United States and its allies.

Speaking earlier Saturday in Paris, Defense Secretary Mark Esper said that the United States would only accept a “good deal” with the Taliban – words welcomed by the government in Kabul.

But Trump’s abrupt announcement draws a new question mark on whether the United States will leave Afghanistan anytime soon.

The decision comes weeks before Afghanistan is set to hold elections, an unwieldy exercise even in more stable times.