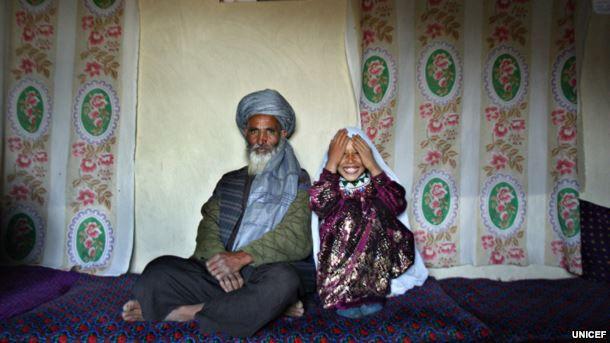 The State of World Population 2020 report released on Tuesday by the UN sexual and reproductive health agency, said that every year, millions of girls are subjected to practices that harm them physically and emotionally, with the full knowledge and consent of their families, friends, and communities.

“Harmful practices against girls cause profound and lasting trauma, robbing them of their right to reach their full potential,” said UNFPA Executive Director Natalia Kanem.

Over the next decade, 7.4 million child marriages are projected to occur worldwide.

Within a single day, 33,000 girls will be forcibly married.

According to the statement released on Tuesday, conflict, poverty, and traditional beliefs put underage girls at risk in Afghanistan, especially in the remote and rural areas.

“These risks not only prevent girls from their human rights, but also their social rights, and prevents them from education, harms their protection, and increases health threats including their reproductive health and the ability to choose if and when they have children,” the statement said.

Many harmful practices are human rights violations because they arise from discriminatory gender norms that perpetuate inequality. And they are imposed on women and girls, regardless of consent.

The UN said that violence against women has increased during the lockdown. The Afghan Attorney General’s Office also recorded 249 cases of physical assault against women during the COVID-19 lockdowns.

Their analysis revealed that if programmes and services remained shuttered for another six months due to the pandemic, an estimated 5.6 million additional child marriages will be taking place by 2030, meaning that roughly 13 million girls will be forced into marriage in the next decade worldwide.

“The pandemic both makes our job harder and more urgent as so many more girls are now at risk,” Dr. Kanem says. “We will not stop until the rights, choices, and bodies of all girls are fully their own.”

The UNFPA noted that the Afghan government has signed most international conventions and treaties to protect the rights of women and children, including early marriage.

Their statement reads, “From the policy perspective, the National Action Plan for the Elimination of Early and Child Marriage (NAP ECM) in Afghanistan has been adopted and is key progress towards prevention and ending the early marriage in the country, but it needs implementation continues to be a challenge.”

Child marriage is a fundamental violation of human rights that robs girls of their education, health, and long-term prospects.

“We need to renew our commitment and ensure this harmful practice is prevented, and girls and their rights are respected,” UNFPA said.

The elimination of child marriage requires joint action of the government of Afghanistan, religious communities, civil society, and national and international partners.