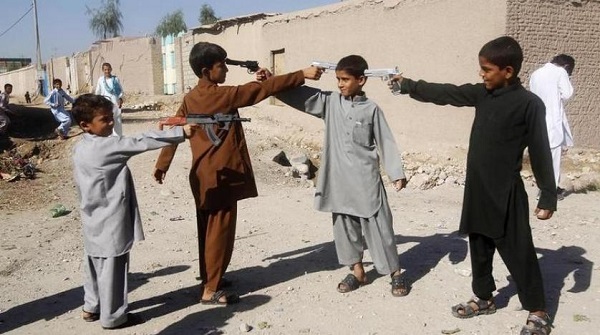 Every Afghan Child Affected By War in 19 Years of Conflict

As of today, every single child born and raised in Afghanistan has experienced war and conflict in their country, Save the Children has said in statement.

October 7th marks 18 years since the start of the conflict between the coalition forces and the Taliban.

An estimated 20 million children wake up every day in fear of gunshots or bombs and being killed or maimed in their streets, schools or homes.

According to the statement:

Over 12,500 children were killed or maimed in the violence between 2015 and 2018, 274 children were recruited for combat or support roles.

More than 3.7 million children are currently out of school, 60 percent of them girls.

At least 700 schools are closed because of the violence in 2018.

3,8 million children need humanitarian assistance, 600,000 of whom are suffering with severe acute malnutrition.

Between 2014 and 2018, over 8,000 civilians fell victim to explosives such as IED’s and mines. 84 percent of the victims of explosive remnants of war are children.

280,000 people fled their homes this year, more than half of them are children.

Onno van Manen, country director of Save the Children in Afghanistan said, “Imagine turning 18 having known nothing but conflict and war throughout your entire childhood and formative years. Life in Afghanistan means living in daily fear of explosions, missing school because it’s too unsafe and not knowing if your parents or siblings will make it home. Violence has been consistently high in recent months. In August alone, averages of 74 people were killed every day.”

The statement stated that it is concerning to see that children are accustomed to these levels of violence.

“Children are remarkably resilient, but no child should consider the sound of explosions or attack helicopters normal. Children in Afghanistan need to be protected and feel safe to go to school and work towards a future.”

Country director of Save the Children in Afghanistan noted that This day marks not one, but several generations losing out on their childhoods and for the sake of all Afghan children and the future of Afghanistan, the warring parties must do everything in their power to stop killing and maiming children during this terrible conflict and adhere to international laws and standards.

“It’s time to stop this war on children. If international humanitarian laws are breached children suffer from it, there needs to be an independent investigation with the aim of holding perpetrators to account. The international community must not forget these children, who are in dire need of physical and psychological support to recover and educational support to rebuild their lives. They have the right to do so in safety without fear of further harm”, the statement added.