Latest Stories » FM Rabbani Meets his Counterpart in Germany, Expresses “Afghanistan After Peace Shall be Different” 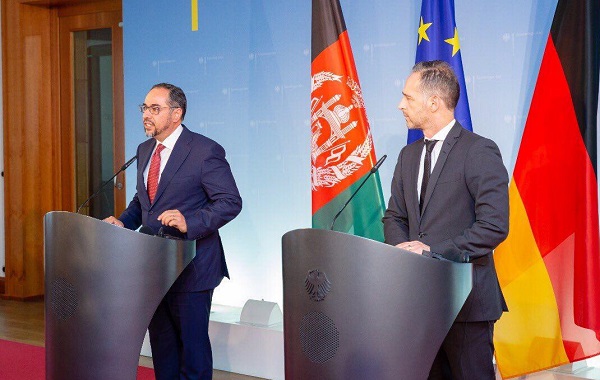 FM Rabbani Meets his Counterpart in Germany, Expresses “Afghanistan After Peace Shall be Different”

Mr Rabbani also expressed his gratitude for the German Govt’s warm welcome and hinted at the historic relations between Afghanistan & Germany, appreciated the Germany Troops’ positive role in Afghanistan.

Mr. Rabbani deemed Germany’s increased involvement in the facilitation of peace talks & its emphasis over maintaining recent achievements, a source of hope for Afghanistan and praised German efforts doe peace in Afghanistan.

Mr Maas deemed Human Rights and women’s gains as basic issues that should not set back. Talking on his country’s financial commitments to Afghanistan, Mr. Maas explained German investments and the projects undertaken by Germany.
Mr. Maas stressed holding timely and fair elections that is acceptable for all the stakeholders and while pointing at the progress in peace talks, considered the coming days as special for Afghanistan and its allies.

Later, in a press conference with German FM, Mr Rabbani said: “The presence & active role of German forces in the Resolute Support Mission to train and advise Afghanistan security forces has been of crucial importance, particularly in light of the continued threats posed by terrorists”

He added that they highly hope that, with the engagement of Germany in the peace process, Afghanistan will soon witness the holding of direct intra-Afghan dialogue and progress towards achieving a sustainable and inclusive political solution to the ongoing conflict in Afghanistan.

“Protecting and maintaining the democratic achievements of Afghanistan in last 18 years, & the values enshrined in the Constitution, including the provisions on fundamental rights of the citizens, are among our key conditions during the course of negotiations”, Mr Rabbani added.

He also said, “We expect our international partners to render necessary support to the Government of Afghanistan and the election commissions for the holding of free, fair and transparent elections”.

Foreign Minister Salahuddin Rabbani, who is on a state visit to Germany, met with the German Federal Minister for Economic Cooperation and Development Mr. Gerd Müller and expressed his appreciation of Germany’s generous cooperation with & support to Afghanistan, particularly the support provided in terms of capacity building, development and humanitarian assistance.

Mr. Rabbani said, “We want the kind of peace that is inclusive, and one in which all the people of Afghanistan, men&women, could see themselves, recent achievements in the areas of human rights and women are irreversible and undeniable, women make up 50% of the society and without women’s representation, we could never achieve development, the National Unity Government stands firm in protecting the existing values.”

Mr. Rabbani said that Afghanistan after peace is going to be very different and added that foreign investment in Afghanistan, particularly in the construction of hydropower stations and mines will be highly profitable.