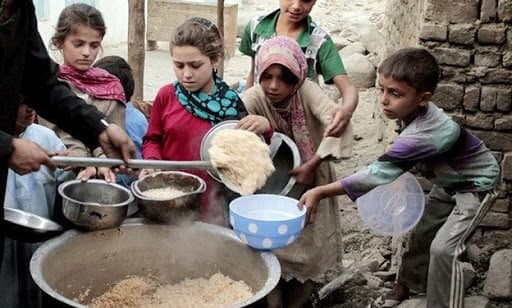 Government of Afghanistan lockdown measures imposed to curb the spread of COVID-19, between mid-March and the end of May, worsened an already desperate food security situation. Small-scale income generating activities were mostly shut down, leading to diminished savings, impacting the ability to buy food.

Marianne O’Grady, CARE Afghanistan’s Deputy Country Director, said, “People are back at work after the lockdown, but the fallout from not saving for months is huge. Many people also accumulated debt during lockdown that they are now struggling to pay back, so day-to-day expenses were, and still are, affected. Putting food on the table is getting harder and harder and with winter coming, we are very worried for the people of Afghanistan. And for women, the situation is even more difficult. In Afghanistan, generally men eat first due to cultural norms, so when there’s not enough food to go around, it’s the women who miss out.”

Women often act as ‘shock absorbers’ in times of crisis, when they have to take on greater economic responsibility for their households. CARE’s programs, including community-based savings groups, have enabled women to better withstand the economic shock of the COVID-19 pandemic.

CARE conducted a Rapid Gender Analysis in Afghanistan in mid-2020. Sixty-two per cent of respondents said food is their highest need. A female respondent from Balkh Province said, “The community is affected by a flood, I lost my house, but most people are now jobless and need assistance due to the lockdown.”

There are currently over 40,000 reported COVID-19 cases in Afghanistan, but testing is extremely limited, so those numbers are feared to be much higher. The health system in Afghanistan was critically weak even before the pandemic hit, with only around 300 ventilators in the entire country. “The health implications are huge and responsibility for caring for family members falls primarily on women, even if they are sick themselves.

“In rural areas, accessing health facilities can be incredibly challenging. Often clinics are far from people’s homes and there are transportation costs to reach the clinics. If there are limited funds available for transportation, families must make tough decisions around who goes to the clinic, and men and working sons are usually given priority,” said Ms O’Grady.

Climate change is another factor driving food insecurity. Afghanistan is one of the most vulnerable countries in the world to climate change and one of the least equipped to manage the impact. “I’ve lived in Afghanistan for many years and during that time, we’ve seen less and less snow falling in the north of the country. Snow is a key source of water for agricultural production. Less snow means less crops and higher prices. It’s another blow for the Afghan people and another factor driving the hunger crisis,” explained Ms O’Grady.

Sven Harmeling, CARE’s Global Policy Lead for Climate Change and Resilience, said, “Man-made climate change has been projected to significantly reduce precipitation in Afghanistan during spring, an important season for food production. As 2020 marks the fifth anniversary of the Paris Agreement on climate change, we are still not seeing sufficient climate action by major emitting countries, nor adequate support for vulnerable countries like Afghanistan, to protect food production from the harmful impacts of the climate crisis. With the current global lack of ambition to slow global warming, Afghanistan is facing the risk of a 7° Celsius (44° Fahrenheit) average temperature increase by the end of this century, which would render catastrophic impacts. CARE calls on the G20 countries to deliver more ambitious climate plans in 2020 to put the world on track with the Paris Agreement limit of 1.5° Celsius (34° Fahrenheit) of warming.”