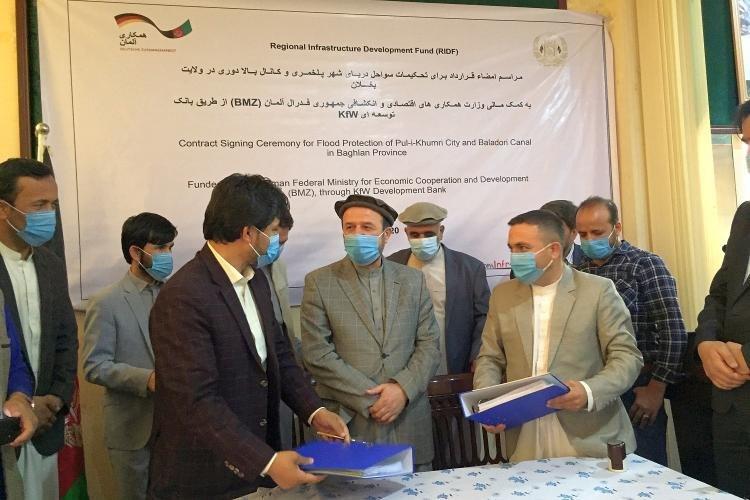 The contract includes rehabilitating the Baladori Intake to safeguard Pul-e-Khumri City and the Baladori Canal in the provincial capital.

The Afghan-German Cooperation’s Regional Infrastructure Development Fund (RIDF) will support the project’s technical implementation together with LKRBA and finance the project at a total cost of about AFN 67.7 million.

Governor Jahid said, “I express my thanks to the German government for funding this project. It will positively impact this area in the long term.”

Recently, flooding heavily eroded the Baladori Intake on the Lower Kunduz River, affecting the livelihoods of the people who live along it.

Several buildings close to the riverbank were destroyed. The existing flood protection measures are in poor condition. To mitigate the risks of flooding, LKRBA proposed the flood protection wall project in 2016. The Provincial Development Council (PDC) prioritized the project in its development plan. Construction works are expected to begin within two months.

“With this important project’s implementation, many houses and community lands will be protected from flooding. Also, the intake of Baladori Canal will be strengthened to supply more water for about 400 hectares [2,000 jeribs] of agricultural land,” said Provincial Director of Baghlan River Basin Agency, Asifullah Rahimi.

The project comprises the construction of 650 metres of gabion, or caged rock wall, and 550 metres of canal protection wall, and includes the rehabilitation of the Baladori Canal Intake.

It will protect land from flooding and improve irrigation of agricultural land, in turn increasing the agricultural output and promoting socio-economic development.

In addition to construction works, RIDF will offer on-the-job training, remote coaching and mentoring sessions for the engineers and managers working at LKRBA. The aim is to develop the department’s capacities to design, construct and maintain similar infrastructure projects independently in the future.