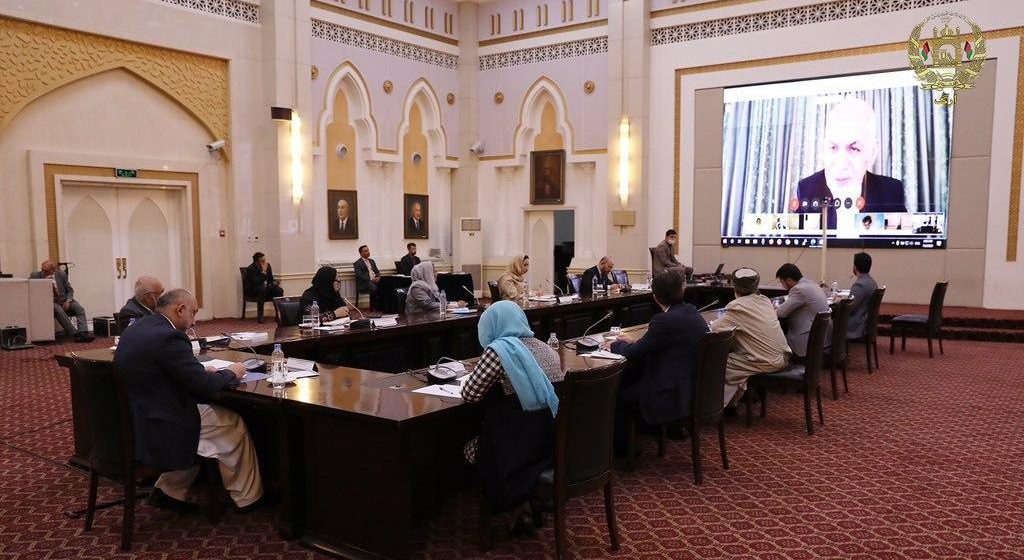 President Ashraf Ghani hosted a meeting on strengthening the regional consensus for peace and the intra-Afghan on Monday evening and was joined by high-level envoys from 20 countries and many international organisations in a video conference organised by the Afghan Ministry of Foreign Affairs.

They took stock of the latest peace process developments and agreed to strengthen international consensus on the way forward.

He also thanked Pakistan for keeping its markets and the border gates open for the transfer of Afghan goods and products.

The president said “this type of cooperation” has helped Afghanistan and kept it away from facing the problem of lack of raw materials and called it a “good example of regional cooperation.”

Addressing the envoys, Ghani said, “You are our partners in the areas of peace, stability, progress and prosperity in Afghanistan.

“Afghanistan has a long-standing and historic relationship with the countries of the region, and our common interest is to increase our cooperation.”

The President also thanked the U.S. for being “one of Afghanistan’s steadfast partners,” adding that America has worked with them to strengthen global and regional consensus on the peace process.

“Our vision is for Afghanistan to be a centre of peace, stability and a crossroads for the region’s development,” he said.

Regarding peace, the leader said, “The goals of the peace process are for Afghanistan to be independent, democratic, united in peace with itself, with the region and the world, while preserving the values of the past, especially the rights of women and youth.”

He added that a peaceful Afghanistan would mean 2% more economic growth for the region and added that regional and global consensus would help build the framework for a peace agreement and achieve a plan of action for peace.

Ghani noted that the current violence rate was higher than last year and pointed to recent UN reports which indicate that the Taliban have not yet fulfilled their obligations from the Doha agreement and are linked to terrorist networks.

He added that the Afghan government had proposed a ceasefire and established a full-fledged negotiating team, as well as a High Council of National Reconciliation, and a strong national consensus was reached.

Regarding the exchange of prisoners, the president said that “we have taken great strides in this area so that the Taliban will renounce violence, release our prisoners and pledge to start direct talks.”

Abdullah Abdullah, chairman of the High Council for National Reconciliation, stressed on key trust-building steps, including the Reduction in Violence (RiV), prisoner exchanges, and initiatives conducive to a humanitarian ceasefire.

All the International partners agreed that both sides need to accelerate the process and stressed on the need for a political settlement benefiting regional stability, connectivity and economic growth.