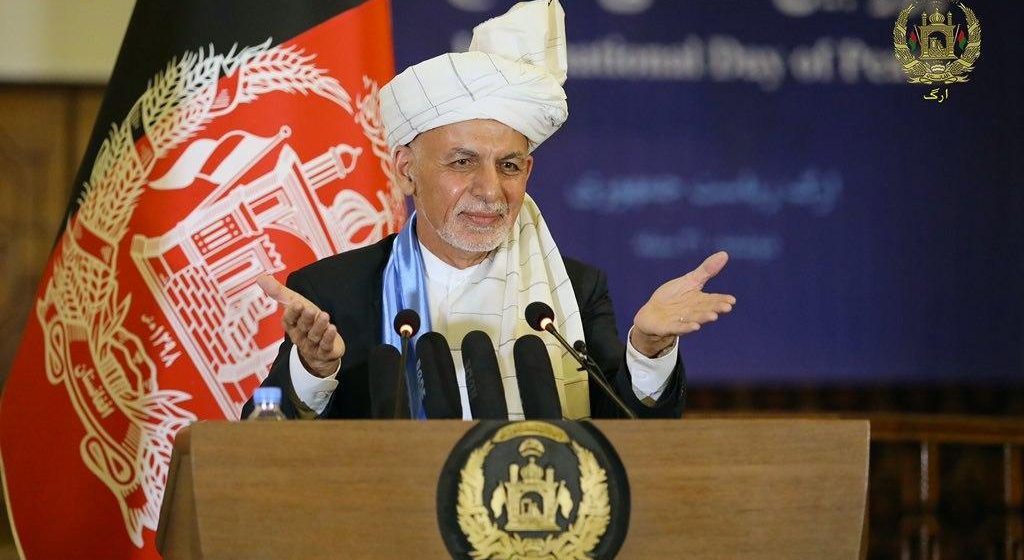 Ghani: Peace Possible Only Through A Political Settlement

President Ashraf Ghani addressed an event for International Day of Peace on Monday evening, and once again called on the Taliban for an immediate ceasefire and the continuation of talks without any interference because “peace is possible only through a political settlement.”

“Today is the day we must accept each other and work together for a united Afghanistan,” he said, adding that the government’s goal is to establish peace and decisively end all the violence of the past 40 years.

Speaking at the ceremony, Ghani said there should be no outside interference in the negotiations and the government delegation should receive full support to represent the Islamic Republic of Afghanistan.

He said in his view, peace meant that from Herat to Kabul, from Khost to Mazar-i-Sharif, and from Nangarhar to Nimruz, an Afghan woman could roam freely and not get harassed.

President Ghani said the Afghan government, by agreeing to a ceasefire two years ago, showed that it is possible to make a truce.

He added, “The last 18 months have gone through a difficult phase and setbacks. But don’t lose heart and wait for the results of peace talks with great courage as “they want you to get out of the negotiating table.”

He also reiterated the government’s position on peace and called for an end to the “inherited” violence that had been ongoing for 40 years.

For the future, he said that political stability would lead to economic growth and eradication of poverty.

“Our future must be law-abiding, and our constitution is not just a piece of paper but values that must be put into practice.”

He said the government has already made plans to integrate between “60,000 to 120,000 Taliban fighters.”

“We have a plan for it. We are ready for it. We should also embrace four to six million refugees,” Ghani said.

At the ceremony, Abdullah Abdullah, head of the High Council for National Reconciliation, lamented that violence has further escalated in Afghanistan since the start of the talks in Doha.

“The continuation of war in the country at the same time as [peace] negotiations in incomprehensible to the people,” he said.

He urged the Taliban to listen to the desire of the Afghan people and establish a ceasefire and reduce violence “to the extent that people feel that the peace talks are being conducted with trust.”

He also said that while negotiations are underway, caution should be exercised in speech. However, he stressed that the current opportunity should not be missed and a unification of the republic will strengthen the position of the government’s negotiating team.

First Vice President Amrullah Saleh said, “The cost of achieving peace is being borne by the people and borne by the poorest. When peace comes, its sweetness must reach their tongues.”

He said that Taliban intends to implement the culture of “Pakistani mullahs” in Afghanistan but will not succeed and criticised the group for the crimes committed during their regime.

“During the Taliban era, the poor people suffered the most while the ministers and officials fled. Poor people were flogged at that time, tens of thousands of girls were forced into marriage… Afghanistan was downgraded. Tithes and zakat.”

He added that there was no rule of law among the Taliban as seen from a rape case where the Taliban did not punish the culprit because he was a commander in the group.

“We don’t remember the Taliban holding trials for their commanders or officials for violating their laws which they call as sharia,” Amrullah Saleh said.

Speaking at the ceremony, Second Vice President Sarwar Danesh called on the Taliban to not disrupt ethnic and religious unity among Afghans for the sake of the peace process.

Reportedly, one of the points of dissent among the negotiating teams in Doha is the religious basis for solving disputes during the negotiations, which the Taliban is insisting be Hanafi jurisprudence.

“On behalf of the Shias of Afghanistan, I urge the Taliban not to make attempt to disrupt the friendship and unity among the people of Afghanistan,” Danesh said.

He added that peace “belongs to everyone,” to all ethnic groups, parties and followers of all religions and social groups.