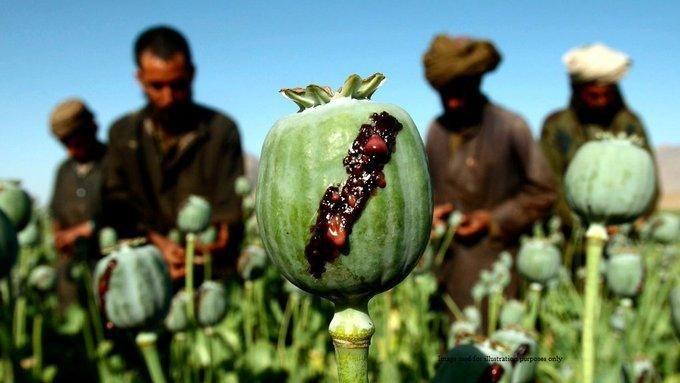 Rowlatt saw the solar panels when he was flying over the poppy fields in Helmand valley, which is the most productive opium-growing province in Afghanistan.

It was the year 2016, and the reporter noted a small array of solar panels in the corner of most farm compounds.

On his return to England, he contacted a company called Alcis, that specializes in satellite analysis and they found farms in previously arid regions.

“It’s just how opium poppy is farmed now,” Richard Brittan, the founder and managing director of Alcis, told the BBC reporter. “They drill down 100m (325ft) or so to the ground water, put in an electric pump and wire it up to a few panels and bingo, the water starts flowing.”

Since the introduction of solar power in 2013, their popularity has soared.

Buying the diesel to power the ground water pumps used to be a farmer’s largest expense. But now, after paying $5,000 for an array of solar panels and installing it, there are virtually no running costs, BBC reports.

Many farms are getting two harvests a year, some even three, and going solar has meant that they can expand their cultivated area, with high yields, by tens of thousands of hectares every year.

Satellite imagery also shows that more people are migrating to the desert. In the years between 2012 and 2019, Alcis saw an additional 48,000 homes being built.

While Afghanistan saw a huge increase in opium production post going solar, a truly bumper harvest in 2017 led to a market crash.

While the area under cultivation in most of Afghanistan fell in the next two years, opium production actually increased in Helmand, with the province supplying 5,000 tonnes out of the 6,400 tonnes produced in the whole country.