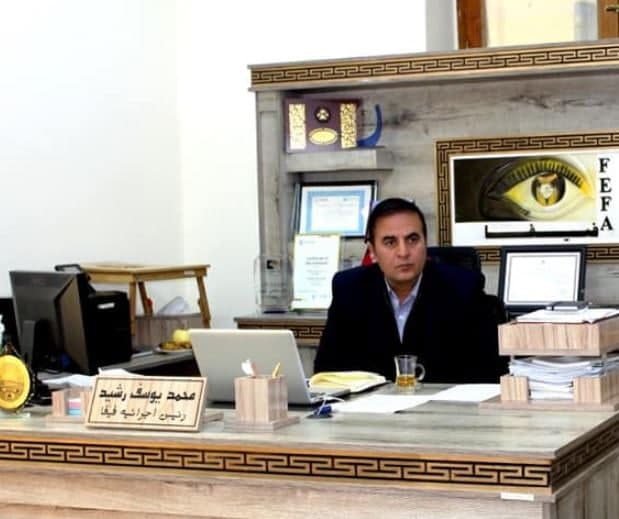 The recent violence in Afghanistan has claimed lives of dozens of people, particularly in the Afghan capital. The victims include civil society activists, journalists, politicians and government officials.

Ministry of Interior (MoI) has announced Yousuf Rashid, executive director of FEFA, was on way to his office in the city when unknown assailants sprayed his vehicle with bullets. The attack also left his driver wounded who died of injuries hours later.

The United Nations Assistance Mission in Afghanistan, or UNAMA, condemned Rashid’s assassination and other attacks against “so many outstanding citizens,” urging authorities to bring to justice those responsible.

“Targeted killings of civilians are taking place at a deeply disturbing rate in Afghanistan,” said a mission statement.

The United States also denounced Rasheed’s assassination. “I am appalled by his murder, another in a cacophony of senseless & endless violence. My condolences to all those who knew him,” tweeted Ross Wilson, the acting U.S. ambassador in Kabul.

Wilson hailed Rasheed as a dedicated and steadfast advocate for representative democracy in Afghanistan.

“He worked tirelessly for years to ensure free & transparent elections that engaged all Afghans. His death is a loss for his family, friends & nation,” the U.S. ambassador said.

NATO SCR in Afghanistan tweeted:
“I condemn the recent horrific attacks in Kabul against civilians. The Taliban must play their part fully to give peace a chance. NATO stands with Afghans against terrorism & supports all efforts to put an end to this pointless violence.”

Meanwhile, foreign embassies in Afghanistan also condemned the attacks and praised Rashid for his hard work and achievements in working to secure a free and transparent election system.

The Netherlands Embassy in Kabul also condemned the attack and shared their condolences with his family and colleagues.

The embassy also expressed its concern over the recent and continued attacks on civil society activists in Afghanistan.

“Targeting of journalists, politicians, students, rights activists is getting more common in Kabul. Our deepest condolences to the families and friends of victims,” Norwegian embassy in Afghanistan said.

Itlay said it condemned the latest string of despicable attacks against journalists, medical staff and democracy activists in Afghanistan.

“Such vile acts intentionally target civilians working towards peace and prosperity and are incompatible with a genuine peace process,” the embassy said.

Netherlands condemned the murder of Yousuf Rashid and said, “His work for a free, democratic and peaceful Afghanistan was invaluable. We offer our condolences to his family and FEFA. We express our concerns over the recent, continued attacks on Afghanistan’s civil society.”

“Rashid Whose sincere and dedicated work with FEFA will not be forgotten. He dedicated his life to a free, democratic and peaceful Afghanistan and his loss sends ripples across local and International Communities who worked withhim,” Canadian embassy in Kabul asserted.

According to the AIHRC the perpetrators should also be held accountable.

The Presidential Palace (ARG) stated in a series of tweets that Ghani has shared his condolences with the families and colleagues of the victims and that he condemned the attack.

The president “vehemently condemns today’s terrorist attack on Mr. Rashid Head of an Election Watch and terms it a cowardly and appalling attack on our freedom and democracy,” ARG tweeted.

The chairman of High Council for National Reconciliation Abdullah Abdullah also issued a short statement on Twitter and said that killing is not a solution to the crisis.

“The cowardly attack & killing of Yosuf Rasheed, the Executive Director of Free & Fair Election Forum of AFG (FEFA)…Terror & killing is not the answer to the current crisis of the country,” tweeted Abdullah.

This comes amid a sharp increase in targeted killings in either shootings or magnetic IEDS across the country in recent weeks.