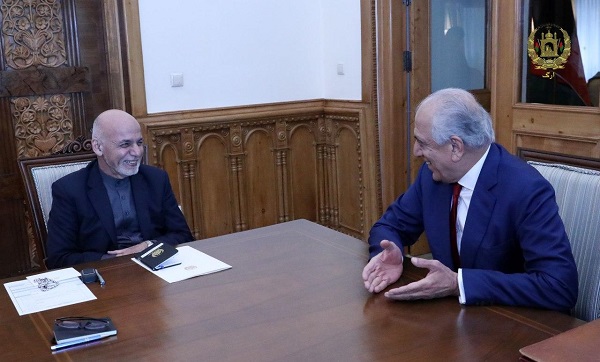 President Ashraf Ghani has met with US Special Representative for Afghanistan Reconciliation Zalmay Khalilzad in Kabul and the two held discussions on the Afghan peace process.

“The US envoy briefed the president about his recent discussions with the Taliban and meeting with Pakistani officials”, the Presidential Palace said in a statement.

“We are waiting for a clear answer from the Taliban for a ceasefire or lasting reduction in violence based on a working mechanism which is acceptable to the people of Afghanistan and the US government,” the Palace quoted Khalilzad as saying.

According to the Palace, Khalilzad said that no breakthrough was made in talks with the Taliban and that the US expects to reach a conclusion regarding the issue.

US ‘peace envoy’ to talks with Afghanistan’s Taliban has visited Pakistan in efforts to gather regional backing for reducing Afghan violence ahead of a final deal to end America’s longest war.

During the Islamabad visit, Zalmay Khalilzad tried to rally support for reaching a deal with the Taliban to reduce their attacks on US troops as a first step toward a peace pact to end nearly 19 years of war in Afghanistan, said a statement issued by the US Embassy Islamabad.

Following a series of meetings with Khalilzad on Friday, Pakistan’s foreign ministry also issued a statement claiming support for a “quick” peace agreement with the Afghan insurgent group, highlighting Washington’s desire for a halt to retaliatory militant attacks on the remaining US military forces in Afghanistan since they invaded the nation back in 2001.

Meanwhile, the Taliban stated earlier that they offered Khalilzad a 10-day cease-fire window in which to sign a peace agreement that would be followed by intra-Afghan negotiations.

Khalilzad was appointed by the White House in 2018 to find a negotiated end to Afghanistan’s war that would allow the US to withdraw its estimated 13,000 soldiers and end its longest military engagement.

He has held multiple rounds of talks with the Taliban in the Persian Gulf state of Qatar where the militant group maintains a political office.