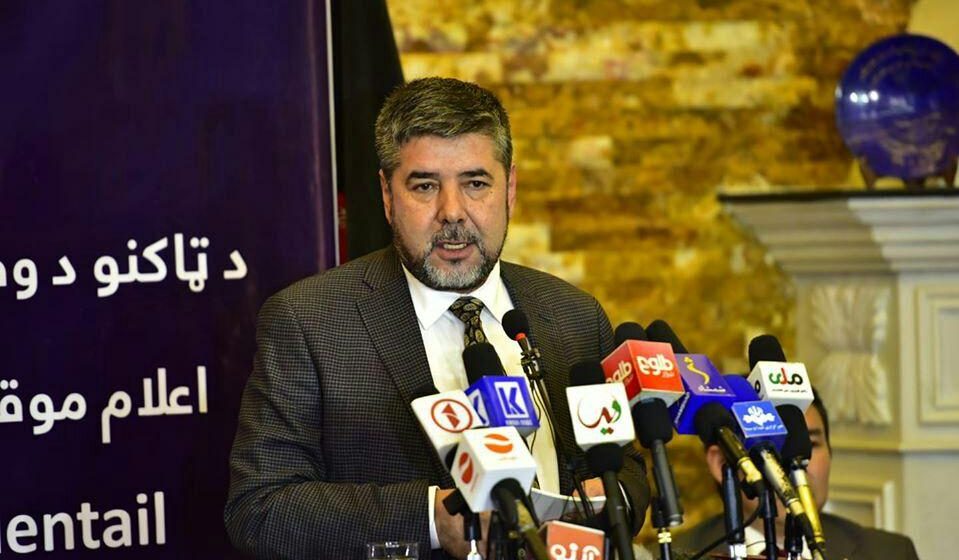 Nabil: We Have Now Become Victims Of Proxy Peace

Rahmatullah Nabil, the former chief of the National Directorate of Security, said that Afghanistan has become a victim of proxy peace, and raised concern about the role of the U.S. envoy for Afghanistan Reconciliation Zalmay Khalilzad.

“For a long time, we have been victims of a proxy war. Now it’s proxy peace — we are paying the price, but we have no say in the peace,” the former intelligence head told a news conference on Saturday.

Nabil fears an old scenario is being repeated in Afghanistan: “The Soviets departed, they left us war and Afghan-killing. Now it’s the same programme. The Americans came for counterterrorism. They are withdrawing but leaving the war and the Afghan-killing to us.”

Nabil added that the people of Afghanistan have the right to ask, “Why our destiny is often traded [in the name of peace] and we pay the price.”

According to him, all the people of Afghanistan want “real peace” whereas what is going on now is a process of “political and economic peace for some people and some countries.”

“The peace process has become a deal, and the people must be vigilant about it.”

He did not name a specific country but said Pakistan had been given a veto and special privileges in the Afghan peace process.

Nabil also expressed doubts about the efforts being put by Khalilzad, adding that Afghans have the right to doubt and question Khalilzad’s peace since he was working for the interests of his country, which is the U.S.

The former head of national security stressed that Afghanistan should not become a victim of any political turmoil in the U.S. presidential elections.

He also criticized the country’s politicians, accusing them of keeping information from the people and not explaining the dangers to the populace. This has prevented the creation of “national trust” which is needed for the negotiations to move forward.

Nabil said some politicians have been threatened by the U.S. to not voice any opposition to the peace process.

He added that the Taliban have gained legitimacy over the past two years when they started negotiating with the U.S. This has made the think they will regain control of Afghanistan with the war.

He also advices that Abdullah Abdullah, chairman of the High Council for National Reconciliation, enter into negotiations with the Taliban’s political office in Qatar directly and through an informal channel, including members of the House of Representatives.

He added that the current peace equation is not working.

Nabil said that the current government’s factions and disunity had added to the complexity of the situation. He referred to a “shadow government” within the government and said that people have the right to ask about it.

He also referred to “termites” that are embedded in the system and are involved in corruption.

He claimed that racial, ethnic and religious discrimination is rampant in the government led by President Ghani and Abdullah.

Enumerating cases such as the appointment of Da Afghanistan Bank governor Ajmal Ahmady, which drew a lot of criticism, Nabil said the “system” is weakening along with the people’s trust.

He said that if the situation continued to deteriorate, regional countries, including Iran, will face each other for control of Afghanistan. He urged Ghani and Abdullah to complete their list of nominees for ministers as soon as possible and submit them for a vote of confidence.

The former national security official’s concerns come as a time when the Taliban has said they are willing to begin intra-Afghan negotiations immediately after Eid al-Adha if the Afghan government releases all 5,000 prisoners “as per our list already delivered to them,” including the 592 which the Afghan government has said cannot be legally released.