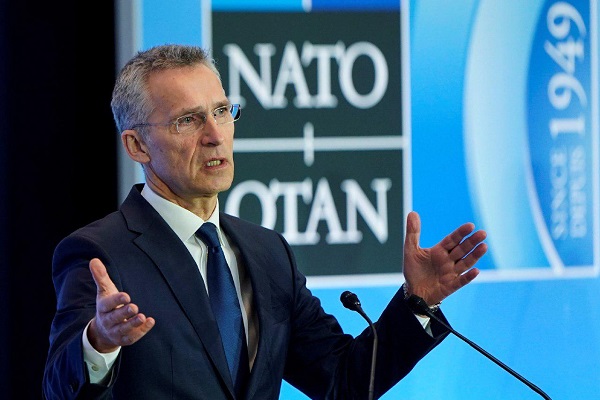 During a joint presser at NATO headquarters on 4 September, NATO Secretary General Jens Stoltenberg announced that, NATO welcomes the efforts by the United States to reach an agreement with the Taliban and strongly supports a political solution. “Our military presence is there to create the conditions for a political solution,” he added.

He clarified that, the Taliban have to understand that they will never win on the battlefield. They have to sit down at the negotiating table. And that is exactly what is happening now. And hopefully there will be a solution that can then bring stability to Afghanistan and also secure that we prevent Afghanistan from ever again becoming a safe haven for international terrorists.
He emphasized that NATO’s aim is to make sure that Afghanistan never again creates the platform for threats, for planning, for organizing, for funding terrorist attacks against our countries.

On the issue of leaving Afghanistan, he said that NATO went into Afghanistan together with United States and NATO Allies. Roughly half of the troops are non-US troops, troops from Germany, from other NATO allied countries and partners.

“We will make decisions on our future presence together and when the time is right we will also leave together. We will not leave too early,” he said.

He confirmed that NATO is very closely consulting with Ambassador Khalilzad, the chief negotiator. “I also have discussed this issue several times with Secretary Pompeo, Secretary Esper And also President Trump. And Khalilzad, the chief negotiator, has been several times here at NATO. So we are closely coordinated with the US on these efforts and we will make decisions together and we will reduce our presence together when the time is right and given that there is an agreement.” Mr. Stoltenberg said.

Finally he assured that NATO will only do things which are in accordance with an agreement. He stressed that NATO will continue to commit its support the Afghan Security Forces both with training, advice and assistance, and also with funding. And any reduction will happen as a result of an agreement.