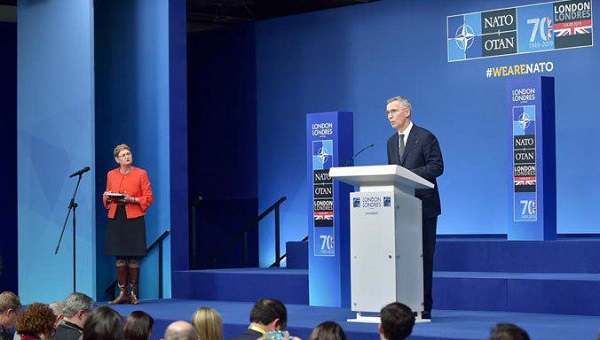 “NATO supported the talks because we believe that we need a political negotiated solution in Afghanistan. The US has consulted closely with all the NATO Allies and partners throughout the process. Both political levels, but also of course Ambassador Khalilzad been many times in Brussels. So we are closely consulting on the efforts to restart the peace talks in Afghanistan.”

“I welcome also of course the efforts to try to either have some kind of ceasefire and or at least a reduction in violence but I will not be specific on the exact preconditions for restarting the peace talks.”

He furthered: What I can say is that we are committed to continue to support Afghanistan. Because we strongly believe that the best way NATO can support the peace efforts is to train, assist and advise the Afghan security forces so that the Taliban understand that they will never win on the battlefield.”

He added that, “They have to sit down and make real and serious compromises at the negotiating table. So we will continue to be in Afghanistan and we really hope that the peace process will provide us with a credible peace deal.”

This comes as U.S. Special Envoy Zalmay Khalilzad, after a visit to Kabul, will travel to Qatar to rejoin talks with Taliban negotiators on steps that could lead to a ceasefire and a settlement to the war in Afghanistan, the US State Department said.

Khalilzad arrived in Kabul earlier on Wednesday to follow up on U.S. President Donald Trump’s visit to Afghanistan last week and to discuss with Afghan officials and others how to convene talks with the Taliban on a political settlement, the State Department said.