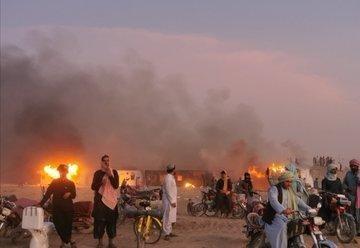 The Office of the National Security Council (NSC) said a high-level government delegation has launched an investigation into the Chaman-Sin Boldak clashes and the consequent rocket shelling across the Durand Line in Kandahar.

The NSC said on Sunday, that the delegation is led by the deputy head of the NSC and has already left for Kandahar.

The Ministry of Foreign Affairs (MFA) had also raised concern and strongly condemned the rocket attacks by the Pakistani military along the Durand Line in Chaman-Spin Boldak, and urged the other side other side to pursue a diplomatic solution on Saturday.

Meanwhile, Pakistani’s Foreign Minister Shah Mahmood Qureshi referred to the shelling and protests at Chaman and said they were investigating it.

“What happened in Chaman yesterday should not have happened, we have taken this up with Afghanistan, the Ministry of Foreign Affairs has taken it up,” said Qureshi.

“I have asked my ambassador to take it up there, I am grateful to Mr. Haneef Atmar who took notice of it, I hope that we will be able to resolve this issue in a good manner,”

The Afghan MFA called for an investigation into the cause of this situation, which claimed 15 civilian lives, with Pakistan’s embassy in Kabul and the Pakistani Ministry of Foreign Affairs.

“Recourse to active diplomacy as an effective tool for reducing tensions along the hypothetical line can be critical to preventing such unfortunate events in the future,” the MFA said.

They emphasized that a meeting of existing bilateral mechanisms should be held between the two countries to investigate the cross-border shelling of Kunar, Nangarhar and Kandahar provinces.

Afghan Army Chief Yasin Zia said he had ordered troops “to be fully prepared for similar actions against Pakistani forces.”

“Air force and special units have been put on first degree alert to reciprocate in case of continued rocketing of Afghan soil by the Pakistani military,” the Afghan Defence Ministry said.