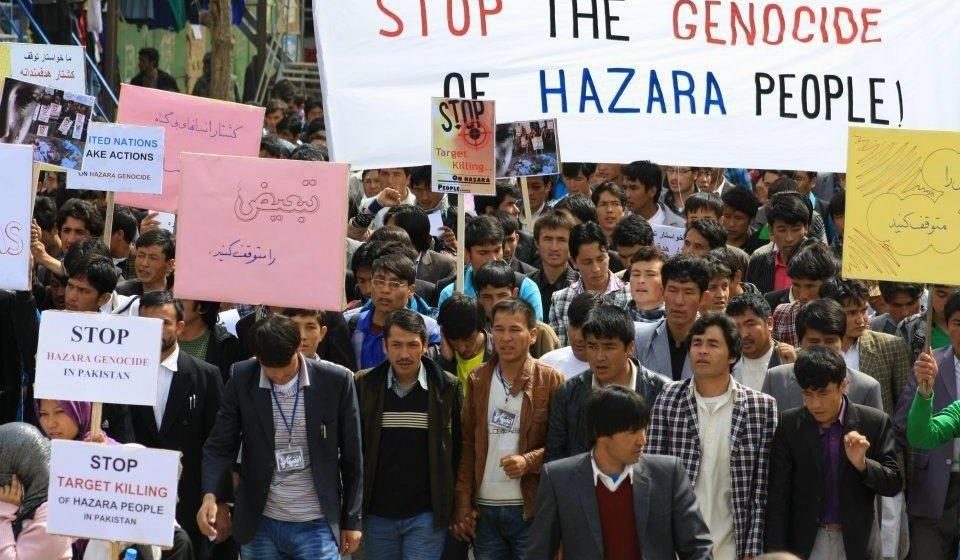 The global Hazara community urged the peace negotiating parties in Doha to protect the security and human rights of all citizens of Afghanistan, and especially consider the concerns of the persecuted and marginalised ethnic groups.

“We strongly wish to see an end to the war and suffering on all sides,” the statement said, adding, “At the same time, we emphasize that any political settlement needs to consider both the history and the diverse needs, interests, and concerns of all citizens of Afghanistan, particularly historically persecuted and marginalized ethnic groups such as the Hazaras.”

They emphasized the “central importance” of protecting the security and human rights of all disadvantaged or marginalized groups such as women, religious minorities such as Hindus and Sikhs, and persecuted communities, particularly the Hazaras.

The Hazara community has been victims of ethnic and sectarian violence throughout the modern history of Afghanistan. The Taliban committed mass atrocities against Hazara civilians in Mazar-i-Sharif (1998), Robatak (2000), Yakawlang (2001) and Mirza Olang (2017). They also destroyed cultural heritage sites such as the Buddha statues in Bamiyan.

“We regret that the Government of Afghanistan has consistently been negligent in protecting the Hazara people, nor has it addressed the pleas of its Hazara citizens for increased security and justice for the victims of targeted violence,” the community leaders said.

Expressing concern that with the Taliban’s increasing offensives in the Hazara-populated regions, the Hazara diaspora said this has resulted in “deep apprehensions and mistrust” about the Taliban’s views and commitments to peace.

Given the history of the Taliban’s relations with the Hazaras, it is essential that the ongoing peace negotiation in Doha addresses the fundamental concerns of the Hazaras and guarantees their existing constitutional rights in a potential peace settlement, the statement said.

“The security of the Hazara people is non-negotiable. Guaranteeing the constitutionally-protected fundamental rights of the Hazaras and other persecuted groups in Afghanistan must be an integral part of any peace agreement with the Taliban.”

The leaders raised a call to action for the negotiators in Doha for recognising the historical persecution of Hazaras based on their faith and ethnicity by the Taliban.

To ensure this, they asked for he Hazaras to be recognised and protected in the peace negotiations as a distinct cultural and ethnic group, whose religious rights continue to be protected Constitutionally and opportunities as equal citizens are not limited due to their beliefs.

A peace settlement must ensure full and equal participation of Hazaras in post-peace government structure and political system, following the principle of inclusion.

“We demand the peace settlement with the Taliban guarantee full inclusion of Hazaras and other ethnic groups in the post-peace political system and government structure and provide equal opportunities for them to take part in all spheres of public life in Afghanistan,” the diaspora said.

Amid heightened vulnerabilities to ethnic and sectarian violence, particularly by the Taliban, the Hazaras also asked for guarantees and measures to protect ethnoreligious groups from threats of religiously motivated violence including massacres, forced displacements, target killings, and abductions.

“To demonstrate and pledge good faith in the peace process, the Taliban must immediately cease all attacks against the Hazara regions and civilians throughout Afghanistan,” the statement said.

It also asked for the democratic principles of free and fair elections, human rights, and fundamental freedoms guaranteed in the constitution of Afghanistan to be protected during the peace negotiations along with the Afghan Constitution.

The Hazara diaspora said, “Afghanistan’s Constitution is among its most important achievements post-2001 and must be protected. Chapter Two [Fundamental Rights and Duties of Citizens] is non-negotiable.”

They also called for equality, the respect of Afghanistan’s international human rights commitments and obligations, and the removal of systemic and structural injustices in the end state to the peace negotiation.

The expected “potential” peace agreement must ensure the “equality of all citizens of Afghanistan irrespective of their ethnic, religious, gender, cultural, and other collective identities and affiliations” – including the right to elect and be elected to political offices.

They concluded by demanding a legally binding and pre-negotiated accountability mechanism that ensures the rights and security of the Hazara people, which can offer clear guidelines on what will trigger enforcement mechanisms should the Taliban fail to respect human rights laws.

They recommended doing this by making further international aid and reconstruction support contingent upon the protection and promotion of the rights of vulnerable and disadvantaged groups and communities.