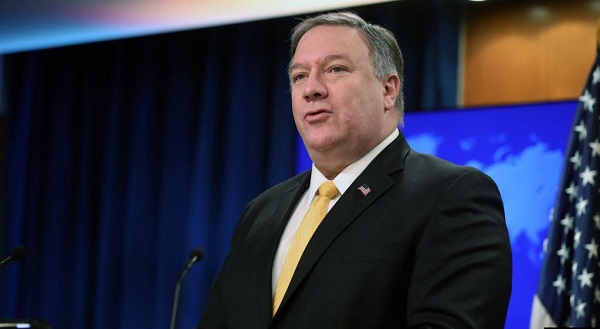 U.S. Secretary of State Mike Pompeo says Washington remains committed to “peace and stability” in Afghanistan and the fight against terrorism following a bloody bombing in a mosque in Nangarhar province.

In a statement on October 19, Pompeo said the “attack on worshippers at a mosque in Nangarhar, Afghanistan, reveals the cowardice and cruelty of those who disregard human life and perpetuate violence against innocents.”

“Places of worship should be sanctuaries, not targets for deadly attacks,” added Pompeo, who said the United States condemns “in the strongest terms this intentional attack on civilians, and offer our condolences to the victims and their families.”

“The United States remains committed to peace and stability in Afghanistan, and will continue to fight against terrorism. We stand by the people of Afghanistan who only want peace and a future free from these abhorrent acts of violence,” he said.

The explosives that went off during Friday prayers were placed inside the mosque in the Jawdara area of the Haska Mena district which left 62 killed and 50 wounded.

Sohrab Qaderi, a member of Nangarhar’s provincial council, said the mosque, with a capacity of more than 150 worshippers at a time, was full of people when the bombs exploded.

“Bodies of 69 people, including children and elders, have been handed to their relatives,” Qaderi said, adding that more bodies could be lying under the rubble.

No group has claimed responsibility and the Taliban rejected any involvement in the incident.

At the same time, the Spokesman for UN Secretary-General António Guterres has condemned the 18 October blast, saying ‘those responsible for this attack must be held accountable’.

Guterres extended his deepest sympathy and condolences to the families of the victims and wished a speedy recovery to those injured.

The US ambassador to Afghanistan, John Bass also condemned the Nangarhar mosque attack and offered his condolences to the victims and their families.

“Killing worshippers assembled together in peace is unconscionable. All Afghans have the right to live and worship together in safety”, he said.