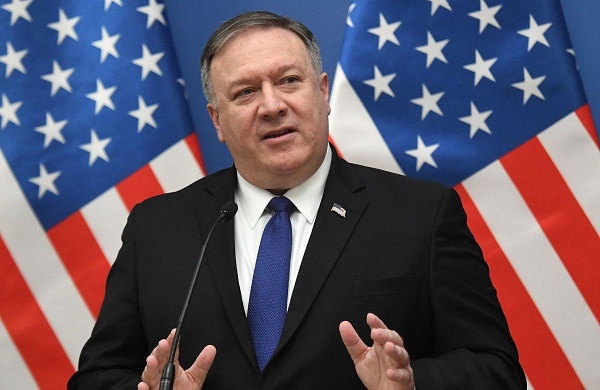 Pompeo Says US Forces to Not Leave Afghanistan Without Peace Deal

President Donald Trump has not made a decision on whether to pull U.S. troops out of Afghanistan after he canceled secret meetings with major Taliban leaders and the president of Afghanistan, U.S. Secretary of State Michael Pompeo said.

“We’ll be talking about that in the coming days,” Pompeo said on ABC’s “This Week,” one of the political shows. “The details of the right level of forces and the nature of those forces, President Trump and the secretary of defense will make good decisions.”

US Secretary of State declared that the Taliban had “tried to gain negotiating advantage by conducting terror attacks inside the country.”

He laid out two conditions for a withdrawal; violence to be reduced and that another terrorist attack on the United States from Afghanistan never be permitted.

“We’re not going to withdraw our forces without making sure we achieve President Trump’s twin objectives,” he said on NBC’s “Meet the Press.”

“I hope it’s the case that Taliban will change their behavior, will recommit to the things that we’ve been talking to them about for months,” Pompeo said.

“And then the Taliban failed to live up to a series of commitments that they had made, and when that happened President Trump said, ‘I’m not going to take that deal. I’m not going to work with someone that can’t deliver on their commitments.’”

He said Trump “broke it off,” because he did not want to “reward that behavior,” referring to Thursday’s attack.

Pompeo said that American forces have killed over 1,000 Taliban in the last ten days and that “while this is not a war of attrition, I want the American people to know that President Trump is taking it to the Taliban.”

The Taliban on Sunday said that Trump’s abrupt decision to cancel the meet with the group’s leaders on a “finalized” deal to end America’s longest war would “damage the credibility” of the U.S., but they believe the U.S. will return to negotiations.

Secretary of State Mike Pompeo told CNN’s Sunday on “State of the Union” that the Trump administration is still interested in a peace deal with the Taliban, but the President will not let up pressure unless the US sees proof that the Taliban can “behave.”

“The American people are demanding it. Now almost two decades and the loss of life,” Pompeo said about the war. “There’s no more clear-eyed administration. When I was the director of the CIA, I had young men and women serving in Afghanistan taking enormous risks to their lives and we’re aiming to get this right. We’re working to talk with those leaders that could actually deliver on these outcomes.”

Pompeo said it was now up to the Taliban to “change their behavior.” America’s top diplomat isn’t saying whether or when peace talks would resume.

He said he hopes the insurgents “will recommit to the things that we’ve been talking to them about for months.”

In the end, Pompeo said, “this will be resolved through a series of conversations. I hope the Taliban will agree to meet with the Afghan government.”

Pompeo’s remarks come as Afghan presidential spokesman Sediq Sediqqi emphasized the United States-backed government’s willingness to negotiate with the militant group, but only on the condition the Taliban stop launching violent attacks.

“We have consistently stressed that genuine peace is possible when the Taliban stop the killing of Afghans, embrace an inclusive ceasefire, and enter into direct negotiations with the Afghan government,” Sediqqi wrote.