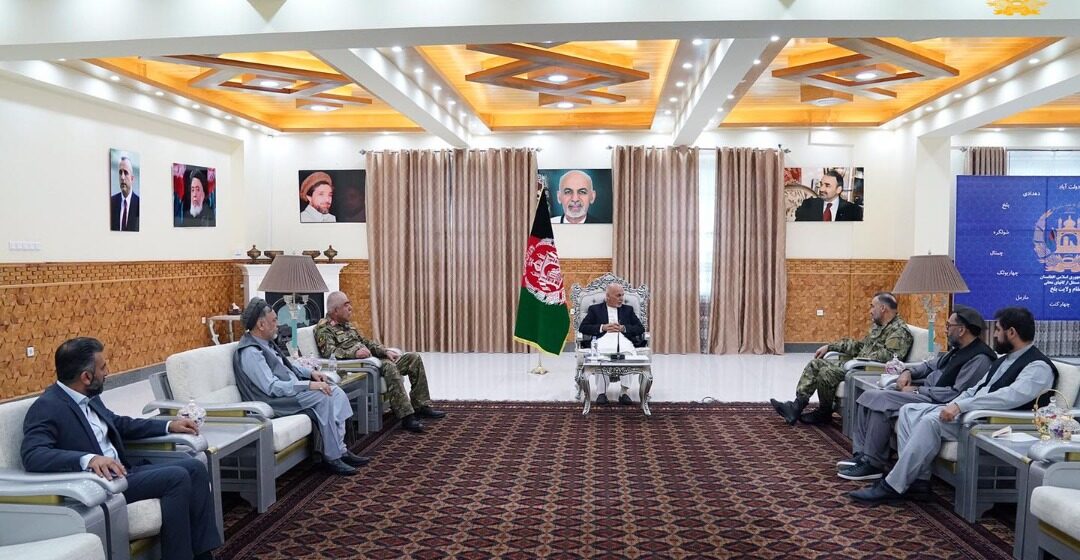 In the meeting, while examining the general situation of the northern zone, comprehensive discussions were held in the field of coordination, equipping and cohesion and mobilization of popular uprisings under the security and defense forces.

President Ashraf Ghani also chaired a senior security meeting after arriving in Mazar-e-Sharif, the capital of Balkh province, and meeting with jihadi and political figures. Initially, security and defense officials in the northern zone shared their preparedness reports and plans to control the security situation, saying they had full support for popular uprisings within the government and are conducting joint clean-up operations in the northern zone. After hearing their reports and plans, the President gave the necessary instructions to the relevant officials in order to control the situation in the northern zone.

It is pertinent to recall that a plane carrying Marshal Abdul Rashid Dostum and a number of his companions landed at Mawlana Jalaluddin Mohammad Balkhi Airport, on Tuesday night. Dostum’s media assistant described his visit to Balkh as examining the security situation in the north and setting up a battle to retake the northern provinces. Dostum stressed on the need to suppress the Taliban. He said in a brief statement that this time the Taliban would not be able to capture the north and witness the fate of Mullah Fazel. Mullah Fazel, now a member of the Taliban’s negotiating team, was the Taliban commander in the north. Mullah Fazel had surrendered to Marshal Dostum after the fall of the Taliban in the past.

However, Marshal Dostum says the Taliban must be suppressed and several operations in Faryab, Takhar, Jawzjan and Balkh must begin against the group. According to Marshal Dostum, the people will start a nationwide uprising against the Taliban. Marshal Abdul Rashid Dostum said about the fall of Jowzjan province, his hometown, that he was not in the country when this province fell. According to Dostum, if he had been in the country, the Taliban would not have been able to capture Jowzjan. The city of Sheberghan, the capital of Jowzjan province, fell to the Taliban four days ago.

This comes even as a security meeting chaired by President Ashraf Ghani was held at the Presidential Palace on Tuesday evening. At the meeting, officials from the Ministries of National Defense and Interior first provided information on recruiting members of the armed forces. The President appreciated the interest of his compatriots in joining the ranks of the country’s security and defense forces, and said that this process should be accelerated.

Also, in the supply and equipping of security and defense forces, the report was presented by the officials of the mentioned sector and instructed to take urgent measures regarding the supply and equipping of the forces. At the end of the meeting, the security situation in different provinces of the country was discussed and the necessary instructions were issued to the relevant officials in order to thwart the enemy’s sinister plans.

President Ghani also met with officials and representatives of various media outlets in the country on Tuesday evening and gave information about the current situation and answered their questions in this regard. He also met with a number of prominent political and jihadi figures in the central regions of the country. During the meeting, while discussing the general security situation in the country, especially in the central regions, they expressed their support for the security and defense forces and the survival and continuity of the republic and views exchanged.

Also, a spokesperson for the Paktia governor said that the commander of an 80-member Haqqani network had been killed in the province. Abdul Rahman Mangal, spokesman for the Paktia governor, told the media on Tuesday night that he had been killed in the Choni area of Gardez. Mangal told RFE / RL that the Haqqani network commander had been killed in a joint operation by Afghan forces. The Taliban have not yet commented on the matter. Of the 14 districts in Paktia, nine have been captured by the Taliban, and fighting continues in Sayed Karam, Ahmadabad and parts of Gardiz, the capital of Paktia province.

On the other hand, Ferdaws Faramarz, a spokesperson for the Kabul Police, said that at around 7:25 a.m on Wednesday morning, an explosion took place in the Mayobin township in PD8 of Kabul. Faramarz added that the incident was caused by a magnetic mine explosion and targeted a Hilux vehicle. He said two people were injured in the blast and taken to hospital.