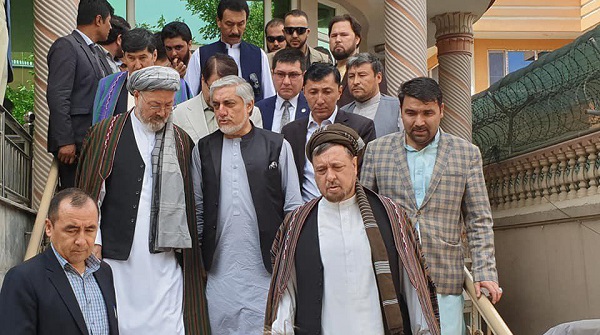 Mohammad Mohaqiq the second deputy of chief executive said that he left the Peace and Moderation team led by presidential candidate Haneef Atmar because they prioritized peace, not election.

Addressing a campaign rally in Kabul with his new political allies, Mohammad Mohaqiq announced that he has left peace and moderation team led by Mohammad Hanif Atmar and joined Stability and Partnership election ticket.

He emphasized that, “People are tired of poverty, hunger and injustice, and Mr. Ghani is a liar, and it destroys Afghanistan’s dignity.”

He added that Facebook accounts of government employees are followed and checked by government and the employees get sacked from duty if they share posts in which the government is criticised.

Mr. Mohaqiq emphasized that he doubts the progress of peace because sometimes the US regrets peace and sometimes the Taliban; that’s why he has given preference to election.

Meanwhile, addressing the same campaign rally in Kabul, High Peace Council chairman Karim Khalili and an ally of Stability and Moderation election team said that the conditions of the country require change, people are upset and all classes of society are doomed with the current situation.

“If we want to endure five years of war, we have to accept the current situation,” he added. According to Khalili, local administrations put pressure on the people using government facilities to support a specific circle.

The chairman of High Peace Council emphasised that, “Election has no contradiction with the peace talks. If the Afghan people want peace, they have to change the status quo of the country.”

Meanwhile, Dr. Abdullah Abdullah, presidential candidate welcomed Mohammad Mohaqiq joining his team, saying that from the very beginning of the collapse of Peace and Moderation team, he had been waiting for reuniting with Mr. Mohaqiq who also supported him in 2014 presidential polls.