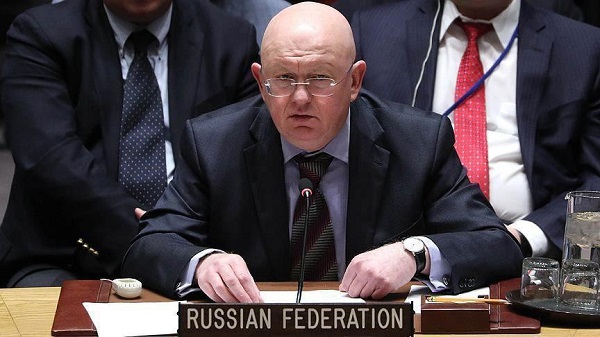 Russia wants a “peaceful” Afghanistan, the nation’s UN ambassador said Tuesday about a potential agreement between the Afghan government and Taliban to solve the country’s long-standing conflict.

As per Anadolu Agency report, Vassily Nebenzia said Moscow had “quite helpful and productive” consultations with Washington on Afghanistan during a news conference while assuming the UN Security Council presidency.

“We want a peaceful Afghanistan, a settlement in Afghanistan. Whoever reaches the agreement and it is good for people of Afghanistan, we will support it,” said Nebenzia.

His remarks were delivered one day after U.S. Special Representative for Afghanistan Reconciliation Zalmay Khalilzad said an agreement on paper had been reached in principle with the Taliban.

Earlier Sunday, he said “we are at the threshold of an agreement.”

Over the weekend, the U.S. and Taliban announced they concluded the latest round of marathon peace talks in Doha, Qatar.

“We will guarantee any agreement that will be reached by Afghanis themselves,” the Russian envoy said, adding that Moscow did not have a double agenda in the war-torn country.

“We are wishing that Afghani people themselves reach an agreement. We welcome [an] early agreement,” he added.

Previously, the Russian foreign ministry has said that Russia is ready to be a guarantor of any peace deal for Afghanistan agreed between the United States and the Taliban.

“The Russian side is ready to be the third party at the signing or a guarantor of how the deal between the United States and the Taliban movement is implemented,” the TASS news agency quoted ministry spokeswoman Maria Zakharova as saying.

Russia, which as the Soviet Union waged a 10-year war in Afghanistan throughout the 1980s, has actively supported efforts to reach a peace settlement in the country.

U.S. envoy Zalmay Khalilzad met his Russian and Chinese counterparts in Beijing after the last round of talks with the Taliban in Doha.

That built on late April meeting in Moscow where senior U.S., Chinese and Russian officials issued a joint statement supporting a peace process for Afghanistan.

Russia has an abiding interest in Afghanistan due to its regional proximity. As former Afghan president Karzai noted, relations between the two countries are among the oldest and most important.

Despite the historically fraught relationship between Afghanistan and Russia, particularly since the Soviet invasion of Afghanistan and ten-year occupation from 1979 to 1989, Moscow has led a renewed charm offensive in the country.

The Kremlin even recently built a new cultural center in Kabul, Afghanistan’s capital. Becoming more involved in the future of Afghanistan is part of Russian President Vladimir Putin’soverarching strategy to reassert Moscow’s influence on the world stage.

From Venezuela to Syria, Russia, mostly through its military, has grown more engaged as it seeks to take advantage of power vacuums created by Washington’s withdrawal from key strategic geopolitical areas.