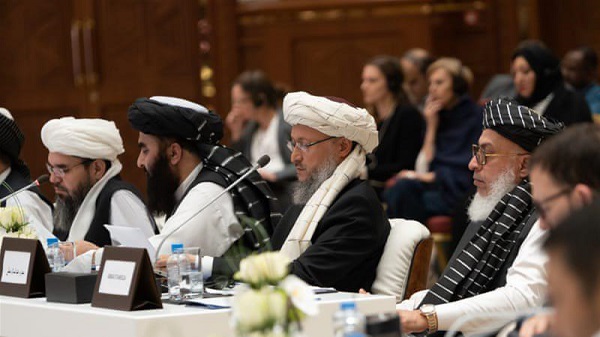 Taliban, Pakistan Call For US to Resume Afghan Peace Talks

Peace talks in Afghanistan must resume as soon as possible, Pakistan and the Taliban militant group urged on Thursday, after Washington called off the talks on 10 September.

According to the Pakistani Foreign Ministry, a high-level Taliban delegation met Qureshi as part of a push to revive the Afghan peace process stalled after US President Donald Trump abruptly declared the talks with the rebel group “dead”.

“Both sides agreed on the need for the earliest resumption of the peace process,” Pakistan’s foreign office said in a statement on Thursday after Pakistani Foreign Minister Shah Mehmood Qureshi met a Taliban delegation that is visiting Islamabad.

Pakistan’s Foreign Minister noted that while the people of both Afghanistan and Pakistan have a shared history, geography and culture, Islam remains the strongest bond between the two brotherly countries.

“People from both countries had also suffered tremendously due to a 40-year-long conflict and instability in Afghanistan. It was time to make all possible efforts for an early, peaceful resolution of the conflict in Afghanistan,” Qureshi said, while adding Pakistan would continue to support all efforts to achieve permanent peace in Afghanistan, which was essential for Islamabad’s own socio-economic development and progress.

The minister added that peace in Afghanistan would prove to be beneficial for the entire region. While appreciating the Taliban’s serious engagement in the peace process, he underscored the need to take these efforts to their logical conclusion.

“The existing, broad regional and international consensus for achieving peace in Afghanistan at the earliest provided an unprecedented opportunity that must not be lost. Both sides agreed on the need for the earliest resumption of the peace process,” a statement issued by Pakistan’s foreign ministry after the meeting reads.

The US and the Taliban had agreed on draft peace plan, but the process was suspend by President Trump following killing of an American soldier in Kabul last month in a suicide attack claimed by the Taliban.

Trump stunned the world when he suddenly declared that the Afghan peace talks with the Taliban were “dead”.

He cancelled a secret meeting with the Taliban and Afghan President Ashraf Ghani at Camp David near Washington after the Taliban claimed responsibility for the attack ..

Incidentally, US peace envoy to Afghanistan Zalmay Khalilzad was also in Islamabad but the Taliban’s Doha-based spokesman Shaheen had told AFP that simultaneous visits are just a “coincidence”.