Latest Stories » This Celebration is Important to Tell Enemies that We Rise Always: President Ghani During I-Day Speech 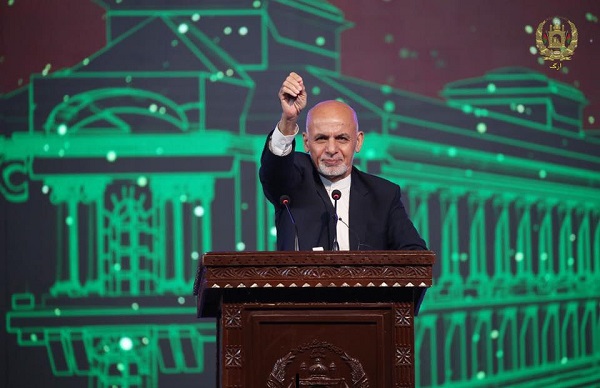 This Celebration is Important to Tell Enemies that We Rise Always: President Ghani During I-Day Speech

Addressing a ceremony at Darulaman Palace, President Ghani on Wednesday said that Afghans will not bow to a minority group which does not have a reputation among the nation.

During the celebration of Afghanistan Independence Century, President Ghani said that celebrating such a day is of a great importance as it’s an opportunity to consolidate the national unity, national solidarity & reaffirm commitment to transforming the country & owning a better future.

He said that celebrating this day is crucial to send a message to the terrorists and enemies of Afghanistan that this great nation has arisen from the ashes to the heights and glories and won’t bend.

President Ghani, “We will hold election, and peace will come, we won’t return to Najib or Mujahidin’s era”.

He pointed out that presidential election is investable and will take place and that election is crucial and imperative as it reflects the will of the nation for republic and freedom.

President Ghani said that neither Genghis nor other colonial powers managed to remain their domination on the Afghan people. He says emperors torched Herat but today Herat shines and those emperors are gone.

President Ghani added thag Afghanistan is among major civilizations of the world and that this land has been the home for great intellectuals such as Mahmoud Khan Ghaznavi, Ahmad Shah Baba and Mirwais Neka.

Ghani highlighted “Darulaman Palace is a symbol of our pride, freedom and identity and this identity gives morale to our security forces to resist against the enemies of the country” and that the foundation of durable state has been laid and the people will defend it.

President Ghani also noted in his speech thay Afghans strongly believe in democracy and all their rights will be addressed within the framework of a republic government and democracy.

President Ghani says Afghanistan still remains under threat and that the “enemies” are targeting every place, including wedding ceremony, schools and hospitals.

He added that the election will be held and that that era has passed when the future of Afghan Presidential Palace was made by “intelligence agencies” of outsiders.

“We will bring peace and I feel proud to have laid the foundation of the peace process” President Ghani announced at a ceremony in Darulaman Palace, “We will bring a peace in which the future of our youths is protected and Afghans from all ethnicities feel pride like roses inside a garden”.

President Ghani says that when the US and Taliban seal an agreement, “we will share the details with our great nation”.
He conceded by saying that the presidential election will take place for sure.