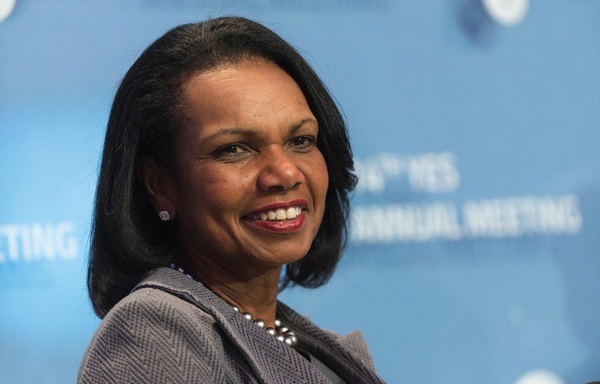 US Former Secretary of State Condoleezza Rice said on Tuesday that the timing of President Trump’s proposed talks with the Taliban at Camp David was “not ideal.”

“I probably would’ve chosen another venue, particularly this week as we look tomorrow to the anniversary of 9/11,” Rice, who formerly worked for President George W. Bush, told Fox News.

Trump said Saturday he intended to hold a secret meeting with Taliban representatives at Camp David, but called it off due to the Taliban’s role in a deadly bombing in Kabul last week that killed a U.S. soldier.
As per Fox News report, Rice said that the president’s cancellation of the talks “was a good decision.”

Rice said “all wars have to end” and she doesn’t mind Trump’s use of “personal diplomacy” when it comes to foreign affairs, but she said such meetings must be thoroughly planned.

“It looks to me as if this one wasn’t quite there,” she said.

“Americans are tired of some of the responsibilities, but frankly there’s no one but the United States” to maintain stability in Afghanistan, Rice said. A recent poll by Pew Research Center found that a majority of Americans do not believe that the conflicts in Iraq and Afghanistan were worth the costs.

The Trump announcement came a day after the U.S. envoy negotiating with the Taliban, Zalmay Khalilzad, completed two days of meetings in Qatar with Taliban lead negotiator Mullah Abdul Ghani Baradar and the commander of U.S. forces in Afghanistan, Gen. Scott Miller.

On Monday, Khalilzad said an agreement had been reached “in principle” to begin a U.S. troop withdrawal and only needed Trump’s approval.

Khalilzad has said the first 5,000 U.S. troops would withdraw from five bases in Afghanistan within 135 days of a final deal. Between 14,000 and 13,000 troops are currently in the country.

But the Taliban, at their strongest since their defeat in 2001 after a U.S.-led invasion, want all of the approximately 20,000 U.S. and NATO troops out of Afghanistan as soon as possible.