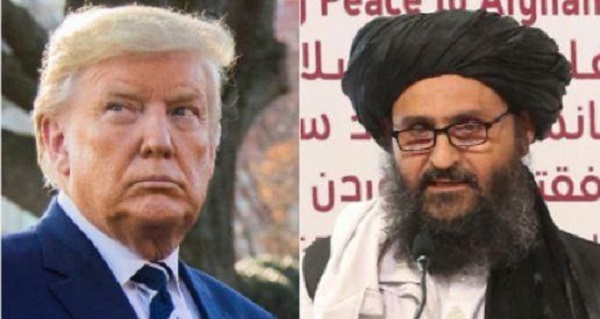 U.S. President Donald Trump spoke by phone Tuesday with a top leader of the Taliban insurgency about the landmark peace deal the two sides recently signed in Qatar that aims to end a nearly 19-year-old war in Afghanistan, America’s longest.

As per VOA report, A Taliban readout of what it asserted was a 35-minute phone call said its deputy chief, Mullah Abdul Ghani Baradar, assured Trump the insurgent group would seek “positive future bilateral relations” with Washington after all U.S. and coalition troops withdraw from the country under the agreement they signed Saturday.

Trump later told reporters at the White House that he “had a very good conversation” with the Taliban leader. Baradar is based in Doha, the Qatari capital, where he signed the historic deal with U.S. chief negotiator Zalmay Khalilzad last week.

“The relationship is very good that I have with the mullah. We had a good long conversation today and you know, they want to cease the violence, they’d like to cease violence also,” Trump said of his phone call, the first such contact by a sitting American president with the Taliban.

“I think we all have a very common interest. … We’ve been there for 20 years. Other presidents have tried and they have been unable to get any kind of an agreement. The relationship is very good that I have with the Mullah,” the president said in reference to Baradar.

The rare contact took place two days after Afghan President Ashraf Ghani ruled out a prisoner swap with the insurgent group, a key component in the U.S.-Taliban agreement.

The Afghan government was not part of the talks between U.S. and Taliban negotiators that led to the signed agreement Saturday.

Baradar called on the American president to “not allow anyone to take actions that violate the terms of the agreement thus embroiling you even further in this prolonged war,” according to the insurgent readout.

Under the agreement reached last week, the United States is preparing to bring down the U.S. troop level to 8,600 within next five months from roughly 13,000 service members currently deployed to the Afghan mission. The rest of the troops would leave the country by April 2021, subject to Taliban counterterrorism commitments and progress in intra-Afghan peace talks.