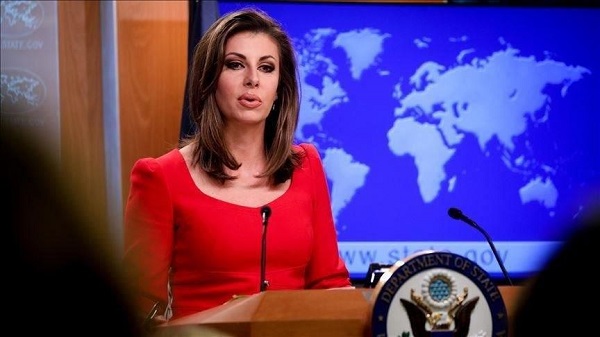 U.S. Urges Disputes Over Afghan Election Be Settled Without ‘Use Or Threat Of Violence’

The U.S. State Department has urged that disputes over Afghanistan’s recent presidential election be dealt with using constitutional and legal means and without the “use or threat of violence.”

As per RFE/RL report, the comments on February 25 follow the announcement a week earlier by Afghanistan’s Independent Election Commission that long-delayed results from the September 28 national election showed that President Ashraf Ghani had been reelected.

The United States also said it welcomed a decision by Afghanistan to delay Ghani’s inauguration for his second term — reportedly for two weeks — to allow adequate time for the government to agree on a “national framework” for potential peace negotiations with the Taliban militant group.

Outgoing Chief Executive Officer Abdullah Abdullah alleged that the official results, which put him in second place behind Ghani, were the result of “systemic fraud and serious electoral irregularities” that were carried out “at the behest of a rival team.”

“As the rightful winners, we decided to form an inclusive government and engage all sides to aim for a just and cohesive outcome,” Abdullah said in a February 20 tweet.

Widespread allegations of fraud in Afghanistan’s 2014 presidential election led to a political crisis between the top candidates, Ghani and Abdullah.

That crisis was resolved by a U.S.-brokered power-sharing agreement that created a fragile national unity government.

Under that deal, Ghani became president, while a new office of chief executive officer was created for Abdullah.

In the February 25 statement, State Department spokeswoman Morgan Ortagus noted that “concerns have been raised about the election process.”

“We expect these concerns to be handled in accordance with constitutional and legal procedures,” she said.

She added that “moving forward, we call on the new government to be inclusive and reflect the aspirations of all Afghans” and that all political debate be carried out “in a calm manner, free from the use or threat of violence.”

Ortagus said it was “time to focus not on electoral politics, but on taking steps toward a lasting peace, ending the war with the Taliban, and finding a formula for a political settlement that can serve the interests of all of this country’s citizens through intra-Afghan negotiations we expect will begin in March.”
Ortagus also said the United States thanked the Afghan government for deciding to postpone its presidential inauguration to ensure adequate time for Afghans to agree on a “national framework for peace that is fully representative of the Islamic Republic of Afghanistan to prepare for and lead” talks with the Taliban.

A representative for Abdullah told Reuters that the swearing-in ceremony would be postponed for two weeks, but Ghani’s office declined to comment.

Ortagus’s remarks come amid a week-long “temporary reduction in violence” agreed by the United States and the Taliban militant group that has been seeking to overthrow the Western-backed government in Kabul.