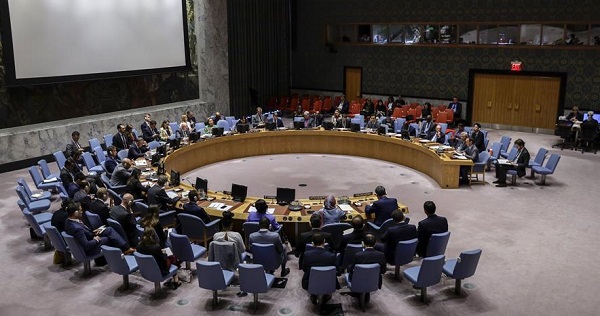 The UN envoy for Afghanistan on Tuesday voiced support for the relative Afghan parties to conduct a “credible and inclusive” presidential election slated for later this month.

The United Nations Security Council holds a meeting on the situation in Afghanistan, at the UN headquarters in New York, on Sept. 10, 2019.

The UN envoy for Afghanistan on Tuesday voiced support for the relative Afghan parties to conduct a “credible and inclusive” presidential election slated for later this month.

Tadamichi Yamamoto, the special representative of the secretary general for Afghanistan, described the election as “another step in strengthening the foundation of a representative democratic political system” in the country.
The United Nations supports fully the efforts of independent election commission, and electoral complaints commission, security institutions, civil society as well as candidates, their supporters and voters to conduct credible and inclusive elections on schedule, he said.

The Sept. 28 poll will be the fourth presidential election in Afghanistan since 2001, when the United States invaded the country following the September 11 attacks and overthrew the Taliban, in power since 1996.

Yamamoto said many Afghan people hope for an end to the conflict, “but they also fear that peace might come at the sacrifice of freedom and rights, which the country has striven to protect and advance for the past 18 years.”

Many young people, especially young women, are worried about future restrictions to their participation in the socio-economic and political life of their country, he added.

In this light, the UN envoy said credible elections would provide an important political foundation for the future of the country as well as legitimacy and authority to the elected president, which would be important in view of the expected peace process.

He also urged the government to provide adequate security arrangements to safeguard the electoral process and appealed to the Afghan people to exercise their right to vote.

In the meantime, China’s UN envoy on Tuesday called for assisting Afghanistan in strengthening its security capacity building as the security situation in the country remains weak.

Speaking to the Security Council, Zhang Jun, China’s permanent representative to the United Nations, cited air strikes and search operations that resulted in a large increase of civilian casualties in Afghanistan.

He voiced hope that the UN peacekeeping mission will continue to help Afghanistan strengthen security capacity building. “The international community should provide training, funding and technical support for this, and assist Afghanistan in effectively countering the threat of terrorism, cross-border crime and smuggling of drugs.”