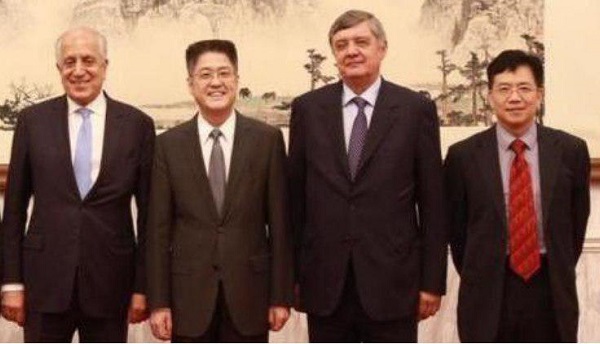 Representatives of Russia, China, the United States and Pakistan agreed Friday that negotiation is the only road to peace in Afghanistan, including an early resumption of direct U.S. talks with the Taliban.

They reviewed the current situation in Afghanistan, including joint efforts to effectively solve the Afghan issue via political and diplomatic means, and reiterated that sustainable peace can only be achieved through political negotiations.

China, Russia and Pakistan support the resumption of negotiations between the United States and the Taliban and hoped them to reach an agreement as soon as possible so as to pave the way for internal negotiations among the parties in Afghanistan, the statement said.

Meanwhile, the quartet pledged to help the Afghan government and all parties concerned reach a comprehensive and sustainable peace agreement with the Taliban, so as to end the war, safeguard the interests of all Afghan people, as well as contribute to regional stability and global security.

According to the statement, the four countries urged all conflicting parties to immediately reduce violence for the sake of creating a good atmosphere for negotiations.

They looked forward to a ceasefire during the internal negotiations of the Afghans, so that all parties can reach an agreement on the country’s future political roadmap.

They also called on the Afghan government and the Taliban to exchange a considerable number of prisoners at the beginning of the internal negotiations.

The quartet emphasized that any peace agreement should include the protection of the rights of women, adults, children and ethnic minorities, and should respond to the strong aspirations of the Afghan people in economic, social, political, development and legislative spheres, the statement said.

They called upon all Afghan people to ensure that their country is not used by international terrorist forces to endanger the security of any other country.

Stressing the importance of combating illegal drug production and smuggling, the four countries urged all parties to completely eliminate drug threats in Afghanistan.

The day-long talks in Moscow came ahead of an intra-Afghan dialogue to be hosted by China. The Beijing talks, which were to be held next week, were postponed, according to officials familiar with the talks. Speaking on condition they not be identified because of the sensitivity of the talks, they said the postponement would be brief but no new date was given.

The delegates from the four countries held their last meeting in Beijing in July when the U.S.-Taliban talks had reached an advanced stage, and the two adversaries in the 18-year-old Afghan war believed they had come close to concluding a peace deal.