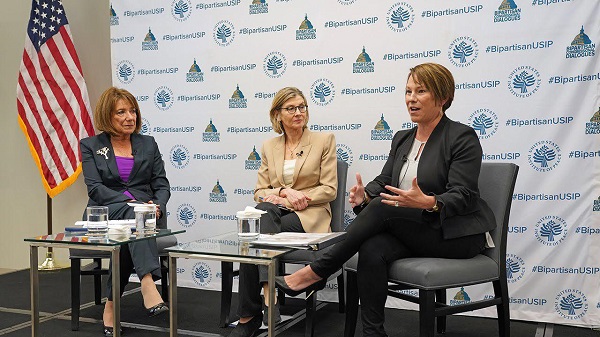 US Congressional Representatives Stress on Importance of Preserving Progress in Afghanistan

The US congressional representatives Susan Davis and Martha Ruby in a bipartisan dialogue at the United States Institute of Peace have focused on the achievements accomplished in Afghanistan.

Following the suspension of the U.S.–Taliban so-called peace talks in earlier last month, many experts, both in Afghanistan and the U.S. fear that the U.S. will withdraw with or without a deal that will ensure peace and stability in Afghanistan.

The two representatives believe that it is more crucial than ever to preserve the important progress made in Afghanistan, especially those for and by the women.

US Rep. Davis reiterated that the progress for women in Afghanistan is moving faster than it is even in the U.S.

While Davis and Ruby are both retiring at the end of their current session in Congress, they are “very hopeful” that the annual congressional meeting will continue to Afghanistan to reflect on the very promising changes made in Afghanistan.

She said that despite the very busy schedule of Congressional members, “there is a lot of interest from new members of Congress to continue this tradition.”

The congressional delegation visits Afghanistan on Mother’s Day every year to meet with female members of the armed services as well Afghan women from different backgrounds.

Over a period of days, they also visit some remote parts of the country to meet in person with local women on the changes in their lives.

Both members of Congress strongly emphasize on the role of women in the progress of Afghanistan as well as their role in the peace making of the country.

Rep. Ruby said that “the way women are treated and held in regard in Afghanistan, demonstrates the strength of the country itself.

It is vitally important that women are given these opportunities. There are so many women that have sacrificed so much and continue to move the ball down the field.”

Both members of Congress have been leading a group of congressional members to Afghanistan since 2007 and have seen the progress there after more than a decade of visits to the country.