Latest Stories » US ‘Delivered’ on Mission in Afghanistan: Pompeo 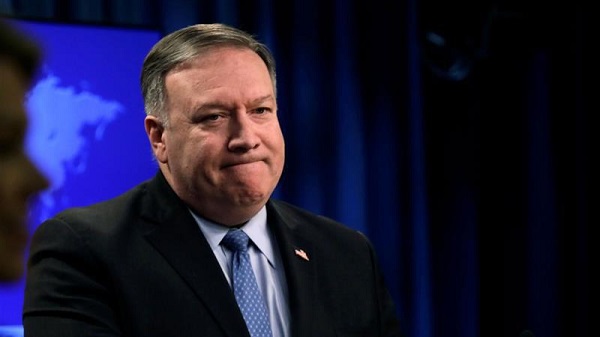 US ‘Delivered’ on Mission in Afghanistan: Pompeo

Secretary of State Mike Pompeo said the United States has “delivered” on its mission to oust al-Qaeda from Afghanistan and deter terrorist attacks plotted in the country and neighboring Pakistan.

As per the Washington Post report, the top diplomat’s upbeat message came ahead of a potential announcement of a peace deal between the United States and the Taliban that has been tested by repeated Taliban bombings and is opposed by Trump’s national security adviser.

In an interview published Wednesday with the Daily Signal, a news outlet affiliated with the conservative Heritage Foundation, Pompeo said U.S. forces engaged in America’s longest war have been “successful” in achieving their original mission.

“If you go back and look at the days following 9/11, the objectives set out were pretty clear: to go defeat al-Qaeda, the group that had launched the attack on the United States of America from Afghanistan. And today, al-Qaeda . . . doesn’t even amount to a shadow of its former self in Afghanistan,” Pompeo told the Daily Signal.

“We have delivered,” Pompeo added.

Pompeo’s remarks come amid an increase in attacks against NATO service members in recent days, even as a State Department envoy announced that the United States and the Taliban have reached an agreement “in principle” in peace negotiations. On Thursday, two NATO service members — an American and a Romanian — were killed in a suicide car bomb attack in Kabul at a checkpoint near NATO headquarters and the U.S. Embassy, the coalition said in a statement.

The agreement is expected to see the partial removal of U.S. troops in exchange for the Taliban renouncing al-Qaeda and preventing the group from recruiting, fundraising, training and other activities. But the Islamic State, the Taliban’s enemy, could play a complicating role as it becomes a greater threat in Afghanistan.

“While it’s true that the U.S. did achieve its initial goal of eliminating al-Qaeda sanctuaries in Afghanistan, it would be premature to proclaim ‘mission accomplished’ on the counterterrorism front in Afghanistan,” said Michael Kugelman, a South Asia expert at the Wilson Center. “To be sure, al-Qaeda has been degraded in a big way, but it remains resilient, and the newer threat of ISIS in Afghanistan is potent.”

The United States invaded Afghanistan on Oct. 7, 2001, less than a month after the terrorist attacks against the World Trade Center in New York and the Pentagon. Originally, the military incursion aimed to oust the Taliban and bring Osama bin Laden and al-Qaida to justice. But the war has stretched on for 18 years through three U.S. presidencies, taking the lives of more than 2,300 Americans.

Since 2014, U.S. and NATO troops have been involved in an advisory mission to help Afghan troops. So far this year, 16 American troops have been killed, including three in recent weeks. That compares to 13 killed last year, and 11 in 2017.