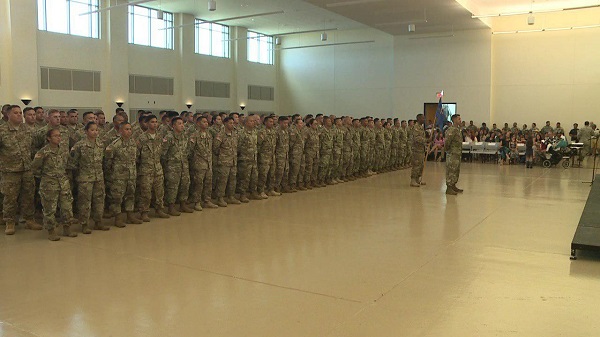 US battalion commander Lt. Col. David Hatcher from Bagram Airfield in Afghanistan says on this year’s Veterans Day, about 350 Hawaii Army National Guard soldiers will continue to be through Christmas and New Year celebrations that they’ll miss before heading home in the spring.

As per Stars & Stripes report, the soldiers will be in Afghanistan for the safety of seven bases where they are stationed.

The 1st Battalion, 487th Field Artillery soldiers have a mission known as “counter-rocket, artillery, mortar,” or C-RAM for short, using a weapon system that shoots down incoming enemy rockets with a rapid-fire pulse of 20-mm rounds.

“When my guys are out and about (on base) and people understand what they do, it’s funny, we’re like loved, totally loved. Everybody loves the C-RAM guys when we’re around,” said Col. David Hatcher.

Since deploying to Afghanistan in early July, Hawaii Guard soldiers have experienced more than 100 rocket attacks and over 150 incoming rockets across the seven bases where they are located. Most are Chinese-made 107-mm rockets.

The Hawaii soldiers with the “Hiki No” battalion operate the Land-Based Phalanx Weapon System, which looks like a “Star Wars” R2-D2 Droid Paired with a six-barrel Gatling gun that spits out 75 rounds a second to destroy enemy rockets in flight.

The semitrailer-mounted and gimbaled system links to an engagement operations room and acquisition radars that track the missile flight. The 1-487 is the first battalion as a whole in the Army to have such a C-RAM mission.

The soldiers operate the weapons systems 24/7, and their actions already “have saved many lives of both U.S. and coalition personnel,” said the 49-year-old Nanakuli man, who works full time for the Hawaii Army National Guard.

Trump in August said he wanted to bring the U.S. troop level in Afghanistan down to 8,600. A proposed peace deal fell apart in September. The Pentagon has said a withdrawal would be “conditions-based.”

In the meantime, the Hiki No soldiers of the 1-487th try to keep the bases safe from the attackers, who don’t want Americans there.

“I knew we’d be saving lives while we are here,” Hatcher said. “But not until we got on the ground and with the guys actually being under attack by rocket attacks and shooting them out of the air and doing what we do, did I realize how important and how vital this mission ended up being. I’m extremely proud of our guys, men, and women.”